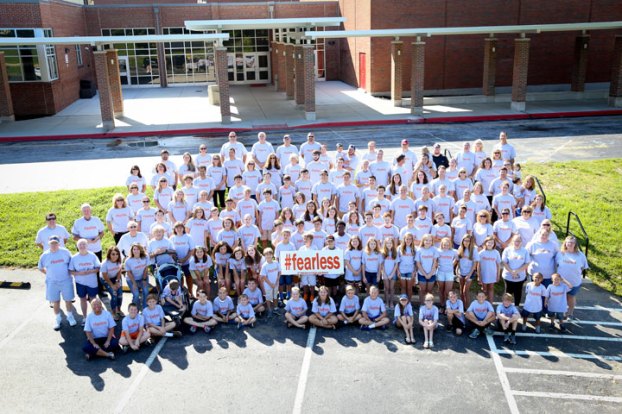 Friends of Hunter Cooper gathered at Campbell Jr. High School for a group photo Saturday in a show of support and solidarity for the seventh-grader who was diagnosed with Leukemia June 29.(Photo by Kasey Moore)

#TeamHunter: Friends of Campbell student collecting donations to help in fight with Leukemia

Members of the Winchester-Clark County community are coming together to support a Campbell Jr. High School student recently diagnosed with Leukemia.

Seventh-grader Hunter Cooper and his family were taken by surprise when his diagnosis was given after seeking treatment for a sports injury, family friend David Weistroffer said.

The diagnosis came June 29, and Hunter immediately began chemotherapy at University of Kentucky Children’s Hospital in Lexington. While he was allowed to come home for the first time Sunday, Weistroffer said Hunter will still need to make multiple trips to and from Lexington to continue his treatments.

“He’s going to miss school for about eight months and then miss all sports activities for about three years,” Weistroffer said.

However, Weistroffer said Hunter has shown incredible resilience in the face of his diagnosis, relying on his faith to get him through treatments and other complications that have come up during the course of his hospital stay.

“The thing that stood out to me was that as they were sitting there giving him the news, he was just very resilient and focused,” Weistroffer said. “The rest of us were basically falling apart, but he was just ready to tackle the situation head on.”

He said Hunter’s motto has been to stay “fearless at the foot of the cross” through his ordeal.

“He said he does get scared sometimes, but if this brought one person to Christ, it would be worth it,” Weistroffer said.

Hunter’s attitude has inspired others to come forward in support as well, Weistroffer said.

Another friend of the family, began making T-shirts for Hunter’s friends to wear that say “#Fearless” and “#TeamHunter.”

When Weistroffer, a local business owner, saw the shirts he immediately asked for some for his entire staff. When the shirts came in, he posed his employees in the shirts and issued a challenge to the Winchester business community.

“I gave them the background to it and said ‘I’m going to challenge you to buy T-shirts for your employees and post a picture to let everyone know you’re #TeamHunter,” he said.

Since then numerous businesses, organizations and individuals have ordered more shirts.

“At this point, we’re into the thousands of shirts,” Weistroffer said. “She stays up day and night pressing these shirts.”

The group is requesting a $10 donation with each shirt, which will go to a fund to help Hunter’s family pay for any medical or other needs he has.

Those who get a shirt are encouraged to take a photo of themselves or their group wearing it and post it to the TeamHunter Facebook page, so Hunter can see the faces of people in the community who support him.

An account has also been opened at Community Trust Bank in Winchester for additional donations, Weistroffer said.

Weistroffer said he has been blown away by the outpouring of support from the community. In addition to the donations and orders for shirts, several RDC students sent videos to Hunter of them shaving their heads in solidarity and offering their support to him.

When students return to school August 16, cursive writing will officially be returning with them. According to Clark County Public... read more