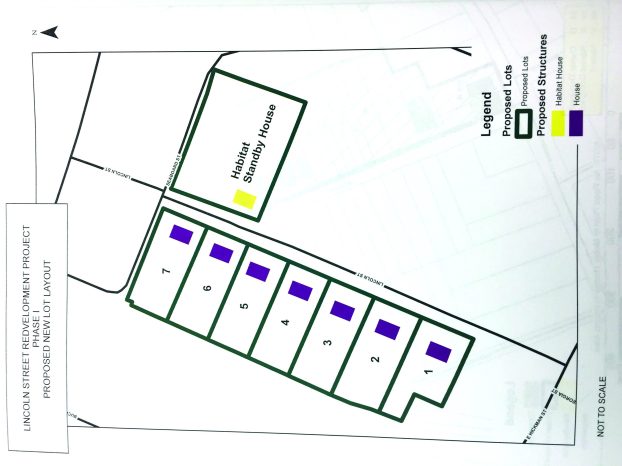 Development documents show the proposed lot layout, including space for a Habitat for Humanity house on Lincoln Street.

Lincoln Street residents got their first glimpse at a plan to redevelop the street — partially using funds provided from a federal community development block grant — at Shearer Elementary Monday evening.

According to Mayor Ed Burtner, the Winchester City Commission is examining whether or not it should move forward with the application for federal money in order to do the project. He said the city’s urban renewal board and city commission have been looking at revitalizing the section of town for some time, but before the city moves forward it wanted to reach out to the residents in the area.

“The point tonight is to hear what you think about the project — good or bad,” Burtner said.

According to a report from planning consultant Kriss Lowry and Associates, the scope of the project requires the demolition and consolidation of 18 existing lots on the West side of the street into seven larger lots and building new houses on them designed for low-income owners.

In addition to the seven lots, the city may also fund the demolition of several lots on the northeast side of the street in order to create a large lot for the construction of a Habitat for Humanity house.

Because the project — if it is done — will likely be using federal dollars, the work entailed must follow federal regulations, which include maintaining a distance of at least 210 feet from the railroad to avoid dangerous noise levels.

“The noise levels when a train goes by is over 75 decibels,” Lowry said. “That’s very loud. If you’re having a conversation when a train comes by, you can’t hear the other person speak. You have to stop the conversation and wait until the train passes.”

Additionally, any structure built within 500 feet of the railroad must be built with a design that reduces noise by 10 decibels.

The nearby trains also create a high level of vibrations for the homes closest to the tracks, with one resident saying it even knocks pictures off of his walls.

Lowry said the people displaced by the project would be given financial assistance based on whether they own their homes or are renters.

Homeowners, she said, will be paid the fair market value of their homes in addition to being offered moving assistance, rent assistance and down-payment assistance if they are going to purchase a new house. Lowry also said Lincoln Street residents will have the top priority after the project if they wish to purchase their lots back.

Renters who are displaced will receive help placing them in new locations, and they will receive rental assistance for 42 months.

Of the about a dozen Lincoln Street residents present at the meeting, the majority said they were in favor of the project moving forward.

After two years of waiting and a few months of construction, Four Mile Road is finally open to through traffic... read more