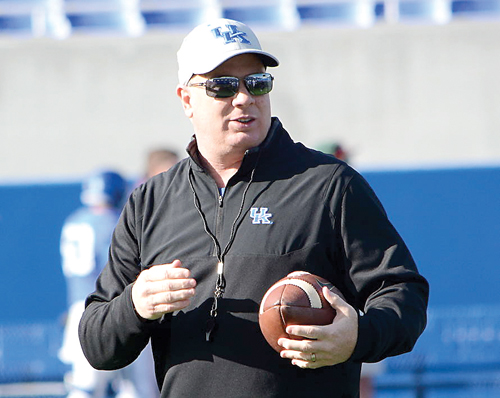 Stoops: Wildcats ready for next step

Mark Stoops got his chance to talk football at the Southeastern Conference Media Days Wednesday and the Kentucky coach had plenty of good things to discuss, while sharing the spotlight with Alabama, Missouri and Texas A&M.

Standing on the same podium a year ago, Stoops was confident the Wildcats could handle more capacity in his third season at the helm. The start — back-to-back losses to Southern Mississippi and Florida, respectively — weren’t indicative of progress, which didn’t start to occur until the third week of the season.

Behind quarterback Stephen Johnson and the emergence of running back Benny Snell, the Wildcats won seven of their last 10 games of the regular-season and were in the running for an SEC East title until losses to Georgia and Tennessee down the stretch prevented Stoops and his squad from making history. The late surge, coupled by a 41-38 win over rival Louisville on Thanksgiving weekend, gave Kentucky its first bowl berth since 2010.

“If you heard me talk a year ago, you heard me constantly talk about our capacity to do more,” Stoops said Wednesday. “Our team needed to mature. We needed to work them harder. We needed to have stronger weightlifting sessions, run harder, longer practices, mentally and physically, to be able to endure the rigors of an SEC season. It was really nice to see that come to fruition a year ago, for us to finish the way we did, culminating with a big victory against a Heisman Trophy winning quarterback, our arch rivals on the road against a ranked opponent, beating Louisville to propel us to the TaxSlayer Bowl. So that was a really, really exciting time for us.”

Although the Wildcats stumbled and dropped a 33-18 loss to Georgia Tech in the TaxSlayer Bowl, the strong finish, especially the stunner over the Cardinals, gave the Wildcats plenty of optimism going into his fifth season at the helm. Kentucky returns 17 starters on both sides of the ball, including Johnson and Snell on offense.

“We feel like we have an experienced football team,” Stoops said. “And the maturity level of your team is getting better. They can handle more.”

Now that Stoops knows the Wildcats are capable of carrying a heavy load, he wants his squad to become more a more cohesive unit in order to take the next step on the ladder of success.

“I think that’s the biggest thing with our program is consistency, our attention to detail,” Stoops said. “Our players are doing that. And we’re ready to take it to the next level. Again, each and every year I’ve been here, we talked about build, select, develop. And that’s building a winning culture, selecting the right players and developing them and have an intentional development plan once they get on campus.”

Sparked by its impressive turnaround, Kentucky closed the gap in the SEC East have high expectations starting with the season opener at Southern Mississippi on Sept. 2. Other teams in the division, especially Georgia, Tennessee, Vanderbilt and the division’s cream of the crop, Florida, have also improved, making the Wildcats’ climb to the top all that more difficult.

Even if reaching the top can’t be easily attain, Stoops plans to keep “attacking” in an effort to overcome the odds and reach the SEC championship game for the first time in school history.

“That (attacking) was my mantra from day one,” Stoops said. “We’re going to continue to do that. You don’t hear a lot about it because we haven’t been relevant enough in the SEC to this point. We’re gaining on it. We are getting better. We’re getting in position to compete for the East. And our football team deserves that.”

In order to reach that elusive goal, Stoops knows it won’t happen overnight.

“If we go about that with that mentality, stay hungry, stay consistent (we’ll be successful) … it’s all about connecting the dots,” he said. “Our players are starting to understand that. You know, you can’t go from 0 to 60. It’s connecting the dots, doing the things necessary, and being consistent and being redundant with that to put yourself in position to win games.”

There will be a number of changes for the Campbell Junior High football team to adapt to this season, which... read more