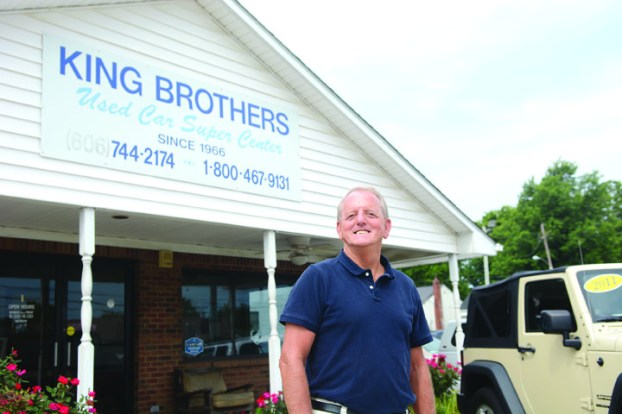 In 1966 Douglas King and his brothers, Leslie and Paul, decided to open a used car lot together following in the footsteps of their father.

This year, the same business is beginning it’s second half-century of operation.

While Paul eventually moved on to work in auto repair, Douglas and Leslie ran the car lot together until Leslie’s death in 2011. During that time and since, the King brothers have kept their lot a family business.

King said he’s seen many changes over the decades, including changes to how vehicles are financed and the rise of online car shopping, which he says has fundamentally changed the business.

In addition, the kind of vehicles people are looking for has changed, he said.

“In the mid to upper 1970s was when pickup trucks became popular for many people,” he said. “Back in the day the only people with pickups were farmers and construction people, people who were actually hauling things every day.”

In the 1980s the minivan came along, which over time phased out the station wagon that had been a popular choice for families before then. Now, he said, SUVs have emerged as the  dominant family vehicle.

But while these changes have slowly affected the industry King works in, he said he ultimately thinks they are good.

“There’s a lot more choices for people now,” he said. “And that helps people find the vehicle they really want.”

What hasn’t changed though, is the commitment King Brothers offers to its clientele, King said.

He said that many of the customers King and his staff deal with become a part of their extended work family. He said often people will come in after purchasing a car just to sit and talk for a while with King or some of the other workers.

It’s a practice King said he intends to keep pushing, as the 70-year-old said he has no intentions of retiring any time soon.

“This is more than just a job,” he said. “It’s a lifestyle, and I actually enjoy it. I still get that adrenaline rush fro time to time.”

The business’ inventory can be viewed at www.kingbrotherscars.com.

If you have been in the beef cattle business very long, it is no secret pink eye can be one... read more