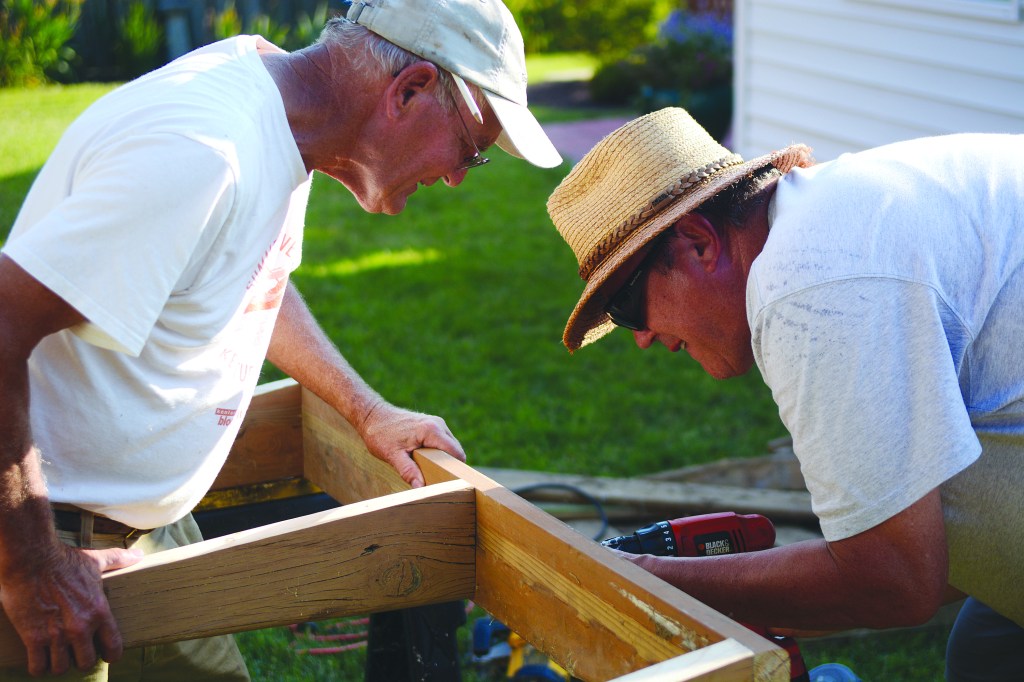 Paul Atchisson and Mike Rodes work together to build a ramp as part of the Central Loves Winchester outreach program. (Photo by Seth Littrell)

The congregation of Central Baptist is taking part in the third year of an outreach program aimed at ministering to the needs of those in the community.

According to Pastor Travis Drake, the idea grew out of a desire for more mission work at the church.

After examining several issues in the community, the congregation decided to dedicate time during the summer to helping those in need, Drake said.

The church works with Clark County Community Services to identify people who need assistance. Many times, the subject is an older person who needs help maintaining their house or who has need of a project to increase their mobility, like building a handicap ramp or handrails on stairs.

“This year we’ve taken the entire month of July, and in place of our Bible Study, we’ve gone out into the community to be the hands and feet of Christ,” Drake said.

Missions coordinator Shelby Gill, who organizes and plans the projects, said he and his volunteers have visited several different homes this summer in the course of their work.

“It’s disheartening to hear some of the old folks,” Gill said. “They’ll say ‘I used to do this, but due to old age I can’t do it anymore.’”

He said the number of volunteers varies each week based on the number of projects and the type of work that needs to be done, but it has not been uncommon to have as many as 50 people spread across several different sites.

However, physical labor isn’t all the program has to offer.

Drake said another group of volunteers acts as a team of chaplains, going to speak with the owners of the homes to keep them company and potentially pray with them.

Another group takes part in an “adopt a block” ministry, in which they begin the week praying over a block of homes before introducing themselves to the residents there over the course of several days and offering to pray with them.

The group also sends out cards to people and organizations in the community.