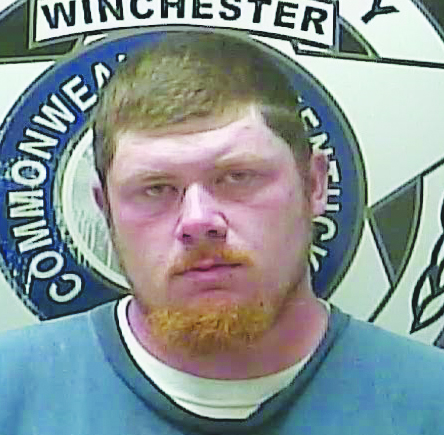 An Estill County man was jailed after allegedly using his 14-year-old son to steal from a friend’s house in Winchester.

Jonathan Flinchum, 32, of Ravenna, is facing charges of complicity to commit theft by unlawful taking, unlawful transaction with a minor and intimidating a participant in a legal process.

Winchester Police were called to Dan’s Discount Pawn on West Lexington Avenue Thursday afternoon when a man tried to pawn a weed trimmer. Officers were called to the store at 2:20 p.m. for a disturbance at the store, which included the victim of the theft.

According to court documents, officers told Flinchum to have no contact with the juvenile, but then motioned for the child to stay quiet at the store.

During separate interviews at the police department, the 14-year-old told detectives he had spent the night at a friend’s house on Cook Avenue. When Flinchum came to pick him up, Flinchum allegedly told him to grab the weed trimmer and fishing equipment. The juvenile said he tried to tell his father no, but Flinchum told him to take them anyway.

During his interview, Flinchum admitted to getting his son to take the items, and that he had used his son to steal from Walmart in the past.

“The way we’re looking at it is the father coerced him into doing the theft,” Hall said.

Flinchum was lodged in the Clark County Detention Center. He will be arraigned today in Clark District Court.

Winchester Municipal Utilities has advertised for bids for the construction of a new water treatment plant near Lower Howard’s Creek.... read more