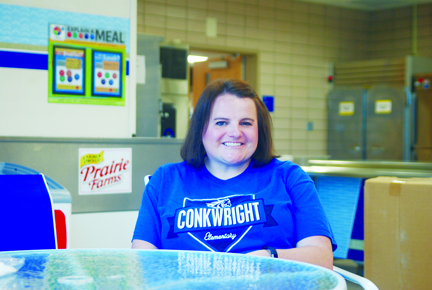 Jess Towes sits at her table in teh cafeteria at Conkwright Elementary School. During the last school year, she had lunch one-on-one with each student at Conkwright. (Photo by Fred Petke)

No task too big, small for Conkwright parent volunteer

Jess Toews insists she doesn’t do anything special by volunteering at Conkwright Elementary School.

She just shows up every day.

She greets the children at the door.

She leaves encouraging notes for the teachers and staff.

She helps out in classrooms or making copies or whatever is needed.

She is also the school PTO president and her husband serves on the school’s decision-making council.

“There’s so many children she’s touched,” Conkwright Assistant Principal Sherrye Browning said. “If you can be here in the morning and see the cheers and high fives … it’s only a small part of what she does.”

Toews became involved at Conkwright after her two foster children began attending. As she became more familiar with the school, she saw a need.

“I realized there were so many kids who need someone to love them,” she said. “I arranged with my boss to work every Saturday if I had one day off during the week to come here.”

When her employer went through a merger, her position was eliminated, which opened the door for her to become a full-time volunteer.

“It all happened with perfect timing,” she said. “I didn’t look for anything else.”

And she hasn’t looked back.

“Every morning, I come and drop my kids off,” she said. “I stand by the door and give every kid a hug or a high five. Coming to school can be a dread, so if they are greeted by a smiling face, it starts their day on a good note.”

The staff isn’t left out either. She leaves encouraging notes in a teacher’s mail box every day. She knows everyone.

She looks for ways to interact with everyone, especially the students.

“Last year I had lunch with every kid in the school,” she said. “I wanted to get to know everyone on a personal level. The kids get to feel special. It’s just a small thing I can do to make them feel loved.”

While the cafeteria can be chaotic, Toews has a special table off to the side where she sat every day with one student. Some teachers, she said, used having lunch with “Miss Jess” as a reward or an incentive for better behavior. By the end of the school year, she met her goal.

Her service to Conkwright and its students continued through her own medical issues. In 2009, she was diagnosed with neufibromatosis, a disease which causes tumors to grow. It eventually left her totally deaf. She has endured two years of chemotherapy and radiation treatments, and is scheduled for surgery Aug. 4 to remove the tumors in her head.

“Even when I was completely deaf, I still came,” she said. “I taught them sign language. I got to tell them bad things happen to good people, but you can still get up every morning and do something good.”

In February, she received her first cochlear implant. Eventually she will get a second.

Toews said the school recorded all the programs so she could watch them later and read lips to understand what was happening.

“Coming here for programs and not hear your children sing is … frustrating,” she said.

After her implant, Toews said the school gave her the videos again so she could watch and hear everything.

After she recovers from her surgery, Toews will be back at Conkwright doing what she does.

“I feel everyone in the building is my family and it’s the greatest honor they let me come every day just to hang out,” she said.