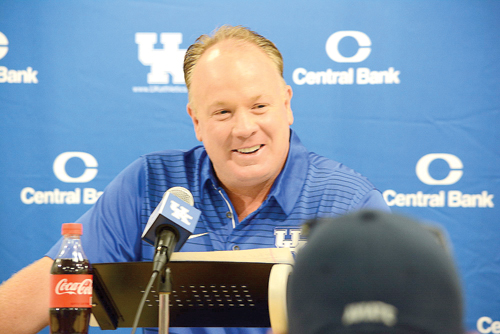 LEXINGTON — Talking season is over.

Kentucky coach Mark Stoops and the Wildcats met the media Sunday and then went to work in preparation for the upcoming season. Stoops is tired of talking about what he expects going into his fifth season at the helm. He is ready for action in the form of one-a-day workouts during the next four weeks.

The fall workouts are a change from the past when teams opened camp later in the summer with grueling two-a-day workouts during the dog days of summer. Those type of workouts are no longer permitted in college football. Stoops said the earlier workouts spread over a longer period of time will be beneficial. He hopes that results in more quality and productive practice sessions as opposed to a quantity of sessions in less than three weeks before kickoff.

“At the end of the day, our players will have more work this camp than they did last (year),” Stoops said. “It doesn’t matter how many reps you’re doing if you’re not doing it right. We need to be more efficient and I think that’s what I’m most excited about, the efficiency of our practice, but we definitely will have more.”

A year ago, Stoops sensed his team could handle more capacity and a bigger workload, but concerns lingered after the Wildcats lost their first two games, including a disappointing 44-35 loss to Southern Mississippi. Despite the sluggish start, the Wildcats rebounded and won seven of their last 10 regular-season games, capped by a 41-38 triumph over rival Louisville, landing Kentucky a spot in the TaxSlayer Bowl.

Stoops likes the direction his team is headed following a breakthrough in his fourth season with the Wildcats. During the previous two seasons, the Wildcats opened with a bang and ended with a dud. Stoops is hopeful the Wildcats, a team assembled of his own recruits, have moved past the immaturity stage within building a program.

Under his watch Stoops said the players “put in the work and laid a good foundation” during the off-season, which he said gives the team a chance to be successful since “the training has been done.”

“I really like where we’re at right now compared to last year,” he said. “I just feel like the ownership, the leadership, is much stronger, and it should be. We expect to be better. We should be better. We’re going into year five, we ought to be better in all areas.”

Although the Wildcats are poised to improve on last year’s successful campaign, Stoops knows the season is a grind and wants the Wildcats to continue to “build, build and build” in order to establish a sustainable, winning environment.

“It’s about where we finish,” he said. “Nobody predicted us last year to finish tied for second in the East either. We would like to get better than that. … And I’ve said it from day one and I’ll say it now, we need everybody. This isn’t just about me or the quarterback or any one position, it’s about all of us.”

Notes: Freshman receiver Lynn Bowden isn’t on campus just yet but Stoops anticipates the four-star receiver will be on campus once he makes it through the NCAA clearinghouse. … Offensive tackle E.J.Price, a transfer from USC, took part of media day festivities Sunday … When asked if there was a quarterback competition between returning starter Stephen Johnson and Drew Barker, Stoops didn’t flinch. “There’s a competition at every position, every day.”

By Keith Taylor Kentucky Today Mark Stoops has plenty of experience when it comes to coaching defense. Stoops, a former... read more