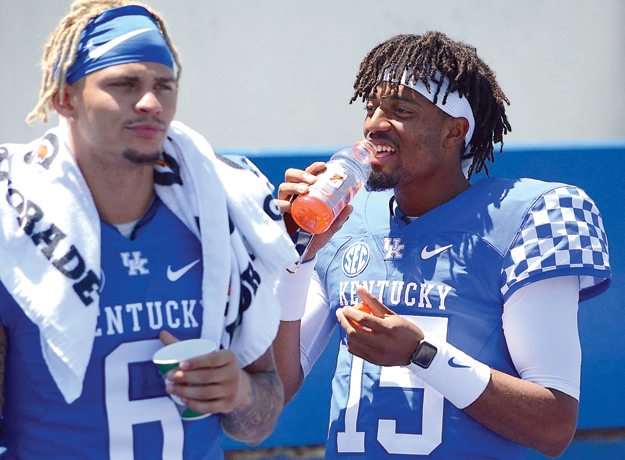 LEXINGTON, — Stephen Johnson’s role has changed since he arrived on campus last fall and it’s all been for the better.

The junior college transfer failed to beat out incumbent Drew Barker for the starting job at quarterback last season, but took over the reigns in the pocket following an injury to Barker in the team’s home opener against New Mexico State and has been the starter ever since. During Kentucky’s media day Sunday, Johnson was more relaxed and poised as he began preparing for his senior campaign.

“Knowing the job is mine going into it, (it gives me) a lot more confidence and (I’m) building chemistry with the new guys coming in,” he said. “I’m really excited about what we’ve got going on. I’m excited and trying to enjoy the process.”

Johnson compiled a 5-4 record as the team’s starter and engineered a 41-38 upset of Louisville in the regular-season finale. He thew for 2,037 yards and 13 touchdowns, complete with 327 yards rushing and three scores. No longer the backup, Johnson embraced his new role at the time.

“You always dream of it, imagine it in certain situations, but it doesn’t always come true,” he said. “Going into the New Mexico State game, I was just happy I got through the game. We did well. Coming full circle from a year ago, is just exciting for me.”

Even though he transitioned into the starting role with ease, Johnson admitted the process was “extremely tough” but he has jumped through the proverbial hurdles to make his mark.

“I was just trying to process it all,” he said. “I know what I’ve gone through to get to this point. I’m a lot stronger than I was last year. I have a lot more weight than what I came in with last year. I’m really looking forward (to fall practice).”

Although he showed an ability to handle the work load despite being thrown into the fire, he struggled with turnovers and lost six of 10 fumbles last year.

That’s something the Kentucky coaching staff will be keeping a watch on during fall workouts, which began Sunday.

“ I don’t think there’s any question he’s going to get it fixed, because he won’t be playing,” Kentucky offensive coordinator Eddie Gran said. “He knows that. We put our defense in some really bad situations last year. If we can get half those turnovers, cut them in half, we’re going to be top of the league. I think we could have won a couple of more games if we don’t turn the ball over.”

Despite his struggles at times last year, Johnson is the team’s starter going into the Sept. 2 opener at Southern Mississippi, but as Johnson knows, things can change, especially former starter Barker, now healthy, lurking over his shoulder.

Johnson has no doubt the Wildcats will build on last year’s success and said the team’s confidence level will provide a boost toward a jump to the next level.

Kentucky coach Mark Stoops has even noticed a difference in Johnson’s approach and demeanor on and off the field during the past 12 months.

“You see him grow, you all know his story, you know how solid of a human being he is but you see him maybe stepping outside of his shell more and be so willing to share his story and talk to so many different groups,” the Kentucky coach said. “I can’t tell you how many people he’s affected and in different organizations and different groups he’s gone and spoken with and how impressed people are to him. And I think that’s one area that he’s really changed and you see him really comfortable in that role and maturing.”

Now that his final hurrah as a college quarterback has arrived, Johnson is eager for the first phase of fall workouts to begin.

“Everyone is just really excited to start football again,” Johnson said. “This team is excited, estatic, ready to put their helmets on and get after it. Going into the season, we can do a lot of great things.”