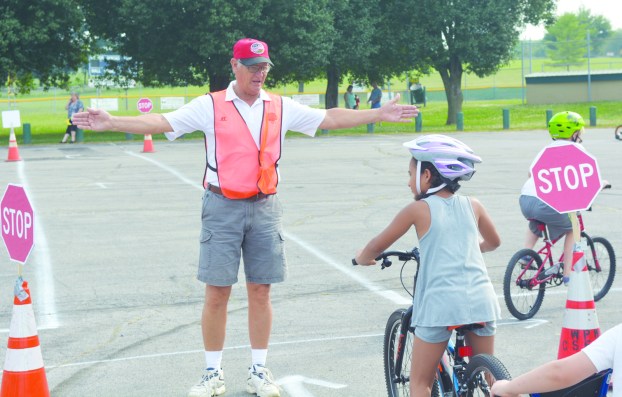 Former extension agent still working with children every chance he gets

On a recent Saturday morning, Roy Turley was wearing an orange, high-visibility vest to direct traffic at Lykins Park.

Traffic came in the form of children on bicycles. Turley’s job was making sure they stopped for the stop sign, before telling their options for continuing their ride around the route on the parking lot.

The public service is only the tip of the iceberg. He serves as a mentor for students at Strode Station and Justice elementaries. He teaches Junior Achievement classes about the economy. He volunteers for Winchester-Clark County Parks and Recreation and Operation Happiness.

That’s after he spent more than two decades as a 4-H agent in Virginia and Perry, Madison and Clark counties, as well as a stint in tobacco sales for Rickard Seed in the late 1970s.

“I just want to help wherever I can,” he said. “This community has been good for my family and me. I’ve tried to return some gratitude for what it’s done for us.”

One of his most consistent places to help has been as an official in youth sports. Through the decades, Turley has officiated basketball, football, baseball and softball, both locally and as well on the state and national levels. He ran the Civitan youth basketball program for several years, and was asked to officiate the final game of the 2003 Little League World Series in Williamsport, Pennsylvania.

“Sports has been very good to me,” he said.

Turley started officiating while he was attending Berea College and playing intramural ball.

“I’ve always been rather athletic,” he said.

At that time, Turley started coaching a pony league team, he said.

“Friday and Saturday would offer junior and senior league teams,” he said. “That led me into more and more (officiating).”

From there, his involvement grew and grew and grew to the point he’s umpired or refereed thousands of games through the decades, throughout Kentucky and into neighboring states.

Being a good official, he said, requires four things.

Maybe there are five things.

“You have to have a thick skin. That comes with officiating many games and maturity,” he said. “You hear (the complaints) but you’ve got to ignore it.”

The life-long thrill, he said, was officiating the LLWS in 2003. After officiating the southern regional tournament in 1999, his name was put on the list as a possible LLWS official.

“I was appointed by the district administrator work the southern regional in Indianapolis in 2000,” he said. “If you do the final game, you’re nominated to umpire the (LLWS).

“Three years later, I get the call. (It was the) thrill of my life. I was so excited. There are so many people in line and only two people go every year.”

These days, Turley’s still officiating some baseball, but spends a lot of time watching his grandchildren’s athletic events.

“It’s been a good roller coaster ride,” he said. “I don’t know where the time’s gone.”

Clark County non-profit organizations only have a couple more days to submit their applications for a portion of $102,000 from... read more