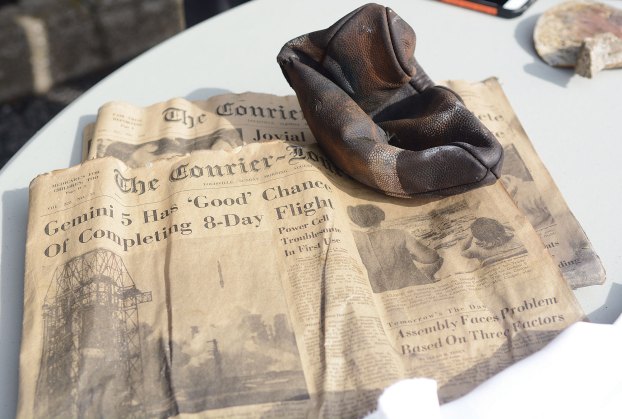 Two copies of the Louisville Courier-Journal and a football from a 1965 GRC Cardinals’ win over Lafayette were some of the items found in a time capsule opened by Kentucky Bank and former Clark County Bank employees Friday evening. (Photo by Seth Littrell)

Kentucky Bank celebrated the opening of its newest branch at the intersection of Bypass and Colby roads with the opening of a time capsule buried on the property of the bank’s downtown branch in 1965.

The capsule was buried by employees of Clark County Bank, the first bank in Winchester which was later acquired by Kentucky Bank.

After 52 years, the capsule was opened by former Clark County Bank president Will Hodgkin.

“It’s been a grand ride the past 50 years for all of us who have been a part of the growth of this bank,” Hodgkin said to a group of former Clark County Bank employees

gathered for the opening. “But the good part of it is all of you  have held up a lot better than what’s going to come out of this (capsule).”

According to Market President Daryl Terry, water had collected in the capsule, causing some items to be destroyed. However, several items did survive over the years.

“There was a lot of things that did not survive, but what did was kind of interesting,” Terry said.

The surviving items included two editions of the Louisville Courier-Journal, a spool of microfiche film with photos of the Beatles on it, four Kennedy half-dollars and a deflated football used by George Rogers Clark High School’s football team commemorating the team’s first win against Lafayette in 1965.

The Medicare bill of 1965, which had just been passed at the time the capsule was buried, was put in its entirety inside, Terry said. But the decades of water damage had destroyed it and it was unsalvageable. Also unsalvageable was a copy of the bank’s original charter.

One injured in Saturday I-64 wreck

One woman has been hospitalized following a wreck on Interstate 64 Saturday evening. According to Winchester Fire Department officials, an... read more