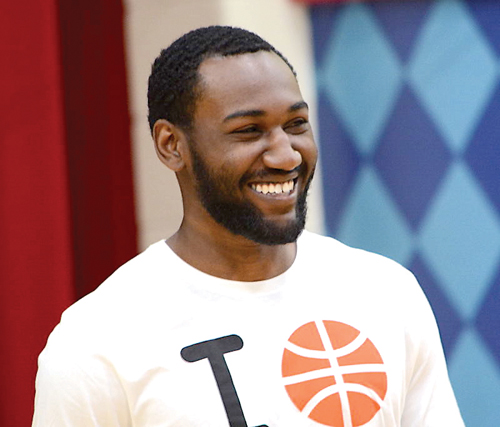 LEXINGTON — Dominique Hawkins is known for his basketball skills, but his football talents are getting a look from teams in the National Football League.

Hawkins, who just concluded a four-year career at Kentucky, wasn’t selected in the NBA Draft last spring, but participated with the Sacramento Kings in the Las Vegas Summer League.

In addition to the stint with the Kings, Hawkins also has worked out for the Philadelphia Eagles as a defensive back. Hawkins was a standout running back at Madison Central High School in Richmond. His mom, Denise Hawkins, has been responsive to those requesting inquires concerning Hawkins’ interest in a football career.

“I have no idea (how they got my mom’s number),” Hawkins said. “They contacted my mom and I don’t have any idea how they’re (were) getting her number. I have an agent for basketball. I guess they don’t get his contact (number). I’ve told him I really don’t want to go into football right now.”

Although he would rather pursue a career in basketball, Hawkins hasn’t been surprised by the interest NFL teams have shown concerning his skills on the gridiron.

“I hear it all the time,” said Hawkins, participating in the John Calipari Pro Camp at Memorial Coliseum this week. “Everybody tells me I’m an NFL player.”

Hawkins hopes to eventually carve out a career on the hardwood and is exploring his options.

“I definitely have the passion for basketball and I love it so much,” Hawkins said. “I really don’t want to leave it. I’m giving football a try to see what I can do. I went and did that workout last week (with the Philadelphia Eagles) and they told me I did pretty well.”

During his time with the Kings, Hawkins shared an apartment with former Kentucky teammate De’Aaron Fox and both players enjoyed the experience.

“We worked out together all summer and that has worked out for me,” Fox said.

When it comes to finalizing a decision, Hawkins will consult with his family concerning his future plans.

“The decision-making will be with my family,” he said. “We’re going to talk about it.”

First call: Derek Willis wasn’t the first person to receive a call from the Detroit Pistons, who signed the former Kentucky standout to a one-year contract. His fiancee, Keely Potts, took the initial message from the Pistons.

“At the time I didn’t know my agent’s contact information and I just put her name down (on a piece of paper), but I put it down on the wrong spot, it was like for an emergency contact and I was like, call my fiancee. It was just weird.”

The 6-foot-9 Willis will be an affiliate player for Detroit and participate in team’s training camp. If he doesn’t make the team Willis will have a spot on the organization’s G League team, the Grand Rapids Drive.

Willis averaged seven points and 5.4 rebounds per game last season for the Wildcats.

Stepping out: Like Hawkins, Fox participated with the King’s summer league team in an effort to get used to the pace of the game at the next level.

“It was fun, getting my feet wet,” he said. “It’s nothing like regular-season games, but it was playing in my first NBA action. It was easier than expected, but I know coming into the season that won’t be the case.”

Fox added that his dad won’t be monitoring his every move and said his father, Aaron Fox, has mellowed since his son graduated from high school.

“You all got lucky,” Fox said. “I you all would have seen him in high school, he was crazy. He’s really calmed down and he has chilled (out). He doesn’t have to say anything. It’s not about the parents.”

Looking ahead: Fox, Malik Monk and Bam Adebayo played pickup with some members of Kentucky’s incoming basketball squad and came away impressed with the newcomers.

Willis liked the way returnee Wenyen Gabriel has progressed during the summer.

“His body was in incredible shape,” he said. “It seemed like he put in a lot of work for that. He’s probably made improvements for sure.”