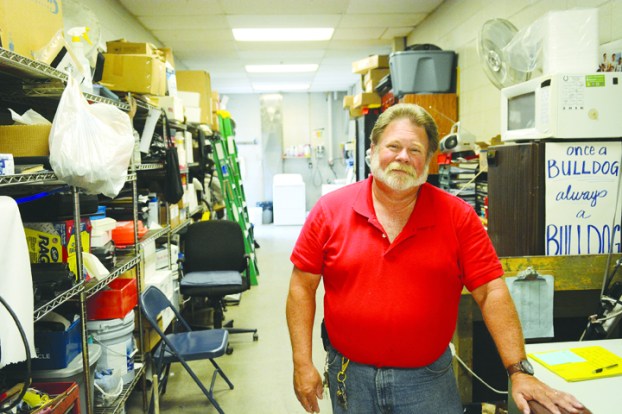 Harvie Spry has worked as a custodian for Clark County Public Schools for 37 years, encouraging the students he comes across each year. (Photo by Seth Littrell)

Harvie Spry has worked in many Clark County schools over the course of his 37-year career as a custodian.

Spry, now the head custodian at Henry Baker Intermediate School, said the duties of his department officially include cleaning the building, doing light maintenance, keeping the grounds outside and more.

Unofficially, Spry also uses his position to be a positive influence on Clark County students.

“I have (grown up) kids holler at me at the Walmart now,” Spry said. “It’s hard for me to recognize them because the kids change so much. But once they tell me their names I remember them.”

Spry talks with the students at Baker every day, giving them encouragement and asking how they are doing.

“You need to treat the kids with respect, because a lot of them don’t get that at home,” he said.

Spry said the mission of CCPS is about the students, and he and his fellow custodians try to make the children’s time at school as enjoyable as possible.

“If you can make them have a good day, feel good, smile and laugh at you I think I’ve accomplished something,” he said. “I don’t ever holler at them, they get enough of that from other people.”

Spry said when he’s working in front of students, he is always sure to show respect not just to them, but to the other staff at the school as well. He said he never uses vulgar language and always refers to people as Mr. and Mrs., despite how well he knows them, so he can act as an example for the children around him.

Throughout his career Spry has worked at Shearer, Conkwright, Trapp,
Providence and Strode Station elementary schools as well as Clark Middle School, which eventually became Baker.

He retired for about a year, while still doing some substitution work at Robert D. Campbell Jr. High School before returning full time to Baker.

Spry’s day begins early in the morning, when he arrives ahead of the students and teachers to unlock the doors, clean the front office and bathrooms and generally make sure the building is ready for the school day.

Throughout the day as he responds to different needs throughout the building, Spry will converse with the students, some of whom respond, some don’t.

“I’ve gone all year long, like last year, and it might be three or four days before school’s out and one of them will finally talk to me,” Spry said. “I’ll talk to them throughout the year and think ‘they think I’m a foolish old man picking at them,’ but finally at the end of the year they’ll talk to me like they’d known me all their life.

“We just try to set forth a good example.”