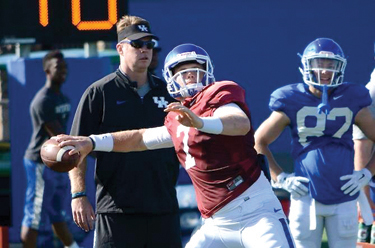 Drew Barker knows what it’s like to be a starter. He’s also been a backup during his three-year career at Kentucky and finds himself in that same role this season.

A year ago, Barker took center stage as the Wildcats’ starting quarterback, a role he kept for two games and for one series in the home opener against New Mexico State before a back injury sidelined him for the remainder of the season. Barker, completely recovered from back surgery, is challenging incumbent Stephen Johnson, his backup a year ago, for the starting job. Johnson went 5-4 as Kentucky’s starter and led the Wildcats to a postseason berth for the first time since the 2010 campaign.

Instead of looking back, Barker, who says he’s at “100 percent,” is moving forward.

In order for Barker to regain the starting job, Kentucky offensive coordinator Eddie Gran said the junior signalcaller must maintain an even keel during the next three weeks leading up to the team’s season opener at Southern Mississippi on Sept. 2.

“(He’s) just (got to) relax and go out there (and perform),” Gran said. “He was the starting quarterback here. So, that’s hard to do. He got hurt ad he came back and he got cleared. Compete. Compete for a starting position. I think that’s the best way to say it. There’s no other way. The one thing about it is when you watch film you production. You’ve got to go out and compete.”

Barker agreed with his offensive coordinator.

“You can’t put too much pressure on yourself when you go out there, especially at the quarterback position,” Barker said. “You’ve just got to move on to the next play if you have a bad play. That’s what (Gran is) saying. You can’t get too up or too down on yourself. You have to stay relaxed and even keel throughout the whole thing. Only one guy can go out there, so you can’t let that affect you either. You just have to keep performing the way you can perform.”

Barker was limited during spring workouts, but has been at full speed since camp began Sunday. Barker’s motivation is simple and he’s is inspired by his past production with the Wildcats.

While sitting out during the final 10 games last year, Barker said the toughest part more mental than physical and added the rehabilitation process “really tough.”

“(The hardest part) was the mental part because of the beginning of the process,” Barker said. “I wasn’t playing and the team was doing really well. Obviously I (was) happy for the team, but I was like, ‘man, that could be me out there.’”

Even if Barker doesn’t open the season as Kentucky’s starting quarterback, Gran wants the junior signal caller to keep a positive attitude and “always be ready.”

“You never know, (junior offensive lineman) Landon Young didn’t know he was going to get thrown into the fire at Florida,” Gran recalled. “He was ready. I don’t know about mentally, but physically he got his body right and he went out there and did a pretty good job for a true freshman. It’s the same thing at that position. He’s got to be ready. If he doesn’t beat him out, then when his time’s called, he better be ready to go.”

Fan Day set: Kentucky’s annual Fan Day will be 9 a.m. to 10:15 Saturday at the Nutter Field House, followed by an open practice beginning at 11 a.m. at the Joe Craft Football Training Facility. The event is free and open to the public.

Special to the Sun Kentucky state and federal agencies, along with several local angling groups, are working together to improve... read more