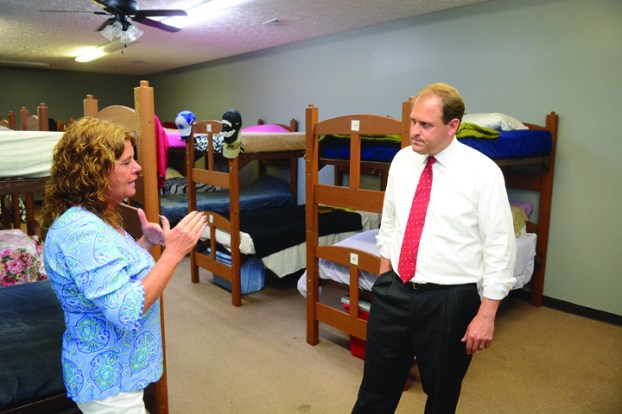 U.S. Rep. Andy Barr visited Winchester Thursday to tour the Beacon of Hope Emergency Shelter and speak with its directors about the state of homelessness in Clark County.

Board Director Michelle Bradford and other volunteers at the Beacon led Barr on the tour of the facility, discussing who the Beacon takes in, how they deal with drug use, and their relationship with members of the community.

The Beacon of Hope has operated in Winchester for nearly three years and receives all of its income through donations from community members.

Barr was complimentary of the work Bradford and the staff of the Beacon do at the shelter, telling Bradford he believed they were doing God’s work.

Barr also said he is looking into the possibility of creating a transitional facility to help residents leaving shelters like the Beacon on their way to getting their own housing.

“We think that Clark, Montgomery, Menifee and Powell, and Bourbon maybe, we think longer term transitional sober living might be beneficial to

this area,” Barr said. “So that when they’ve got a job, when they’ve detoxed and are ready to move out, we don’t want them to go back somewhere. I think there needs to be another phase.”

Bradford said the creation of such a facility would be a benefit to Clark County.

After leaving the Beacon Barr made a second Clark County stop at Sekisui in Winchester’s industrial park. There he met with President Pedro Cordoba before touring the industrial facility.

After several failed motions during a larger discussion Tuesday night about whether or not to give an across-the-board raise to... read more