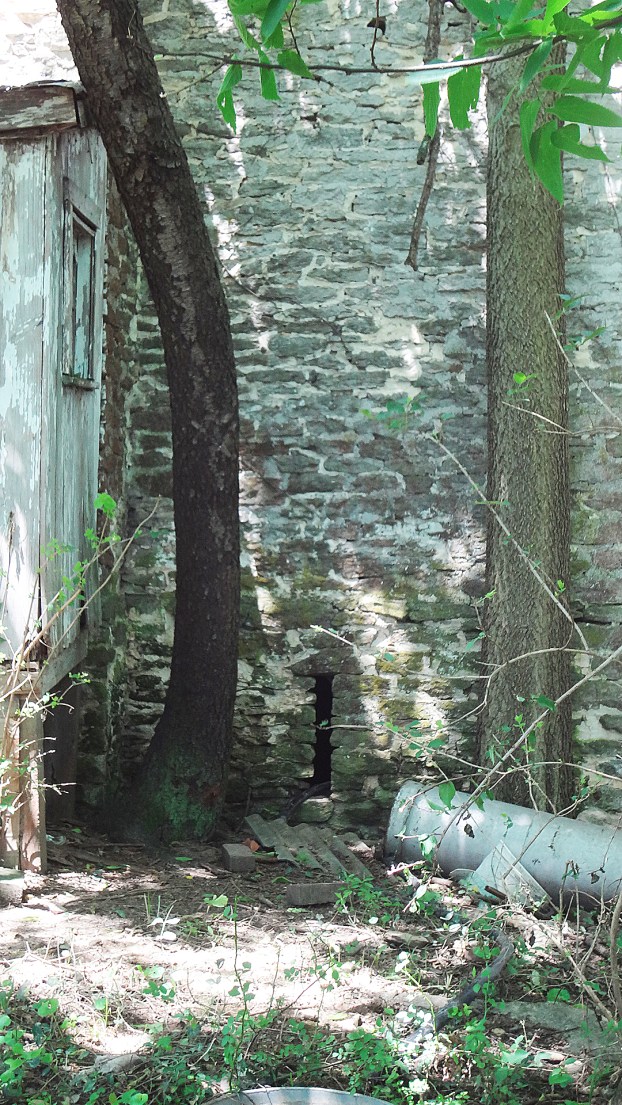 In the late 1920s a pair of Clark County historians, Lucien Beckner and S. J. Conkwright, became interested in the location of McGee’s Station, one of the earliest settlements north of the Kentucky River. Conkwright later wrote, “[We] knew that the location of the Station was somewhere near Hayden Corner, so on making inquiry of some of the old citizens of that neighborhood [we] learned that there was an Old Stone House with port holes in its walls, about one mile south of Hayden Corner.” Hayden Corner, at the intersection of Waterworks Road and Combs Ferry Road, was named for Samuel Hayden, an early landowner there.

Beckner and Conkwright eventually concluded that the station stood at the headwaters of Jouett Creek on David McGee’s 400-acre settlement. The site is on the farm of Harkness and Cathy Edwards on Jones Nursery Road. The old stone house with portholes still stands on the east side of Combs Ferry Road on the farm of Eck Rose. The house has an interesting and confusing history, clouded in controversy.

David McGee with some men from his neighborhood headed west in 1775 in search of new lands. McGee stated in a deposition, “[This] deponent and other adventurers set out from Virginia for Kentucky with an intention to explore the country and acquire land. That as soon as they reached the place of their destination they began to make small improvements and claimed the adjoining land by occupancy, expecting that they would be confirmed to them by the State, as soon as a land office would open for the country.”

In 1779 McGee appeared before the Virginia Land Commission at Boonesborough to present his claim for a 400-acre settlement where he had erected his fort. He also presented to the commission the claim of Bryan McDonald, his Botetourt County neighbor, for a 400-acre settlement on the West Fork of Lower Howard’s Creek. Both had raised corn and built a cabin on their respective tracts in 1776. When surveyed, McDonald’s 400 acres lay on both sides of West Fork. A 1792 court decision reveals that McDonald and McGee had made an agreement that McDonald’s claim would not cross West Fork.

The court decision came too late for John Frame, who settled on McDonald’s claim on the west side of West Fork. John Davis acquired 103 acres of this tract in 1795 and built the stone house with portholes soon after. The original house, approximately 18 feet by 27 feet, was two stories plus a basement. The first floor was divided into two rooms with a chimney at each end. The house has had numerous additions and alterations over the years. At this time, only one of the portholes is visible from the outside—in the east basement wall. The opening is about 3 inches wide on the outside and about 18 inches wide on the inside. Such an opening would give a defender inside a good range of view and field of fire but would provide a very small target for someone outside.

It is uncertain whether Davis built the house himself or hired a mason. The dry-laid, undressed stone gives the construction a rough appearance, quite unlike the fine workmanship of stone houses that would appear on Lower Howard’s Creek a few years later. The roof has kept the house in remarkably good condition considering that it has been vacant and otherwise open to the elements for decades.

Davis apparently left the house, and presumably the county, after being informed that McGee held a superior claim to the land. Davis and his wife Ann were members of Providence Baptist Church. They obtained letters of dismission from the church in 1797, and his name disappeared from the county tax roll. McGee gained full possession of the house and land a few years later. Davis was never paid for the house he erected that stands to this day.