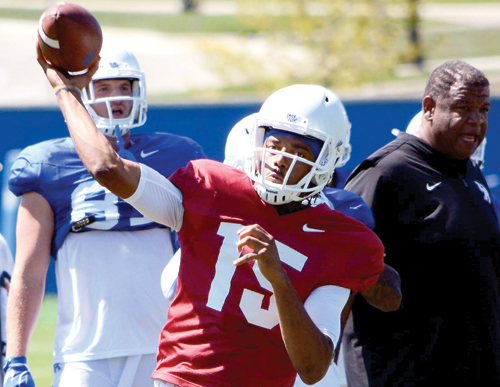 LEXINGTON — Stephen Johnson hasn’t lacked in confidence since fall workouts began and is delving deeper into the team’s play book.

Johnson showed an ability to throw the deep ball last season, but struggled with the short passing game, an area of emphasis for the senior quarterback going into the second week of training camp.

“(He’s) hitting those (intermediate passes) better, on stride and not behind them. I would say that’s (been) the biggest improvement for Stephen,” Kentucky offensive coordinator Eddie Gran said Tuesday.

When it comes to hitting those targets within the middle of the field, Gran said “space is the name of the game.”

“If those guys can go in there and work linebackers and work nickel players and we can be more consistent at that, we’ll be a lot better,” he said. “Greg (Hart) caught a nice route (during open practice), we used the middle of the field and caught a touchdown. We’re able to use the middle of the field and attack it with those guys because they’re doing the right things.”

Gran said the issue between Johnson and the tight ends a year ago was “two-fold.”

“Is the receiver in the right place? Is he at the right landmark? Did the quarterback throw the ball? Target balls?,” Gran said. “Period, the end. It’s technique, it’s all technique.”

While Johnson has been making strides, backup signal caller Drew Barker also has improved and appearing more like himself before a back injury sidelined him for the last 10 games of the season last year.

“I don’t see (any difference) and that’s been really encouraging,” Gran said. “Coach (Darin) Hinshaw is doing a great job of doing grasp drills, Some stuff where’s he’s throwing and twisting and getting on the ground without him getting hit. It’s been really good so far.”

Barker added the depth at wide receiver has also proven to be beneficial this fall.

“There is a lot of competition right now and it’s exciting from a quarterback’s standpoint,” Barker said. “We have all of these options. I just like the leadership (in that group) and how it’s evolved over the years and how the older guys are taking the younger guys under their wing and trying to show them the ropes.”

Scrimmage set: The Wildcats are schedule to have their first scrimmage Saturday, three weeks ahead of the season opener set for Sept. 2 at Southern Mississippi.

The intra-squad scrimmage won’t be open to the public or media, but will give the coaches and players a handle on the team’s progress, especially in the backfield, during the first two weeks of camp.

Learning to swim: Four-star prospect Lynn Bowden has been practicing for less than a week. The heralded prospect is at least six days behind schedule and has been playing catch up since he was cleared to play last Friday.

“He’s swimming right now,” Gran said. “He is just trying to learn the offense., He’s athletic, he can catch the ball … just what we thought. He’s trying to get six practices into one. That’s really hard. We’re going to have to bring him along.”

Like, Gran, Kentucky’s players have been impressed with Bowden during his first week with the team.

“He’s good and definitely a real good athlete,” Kentucky tight end C.J. Conrad said. “He’s got a little ways to go when it comes to play book and he’s a little behind, but you can definitely see the athleticism (he has). We’re definitely excited about him.”

By Keith Taylor Kentucky Today LEXINGTON — Benny Snell hasn’t reached his limit as a running back. In his mind,... read more