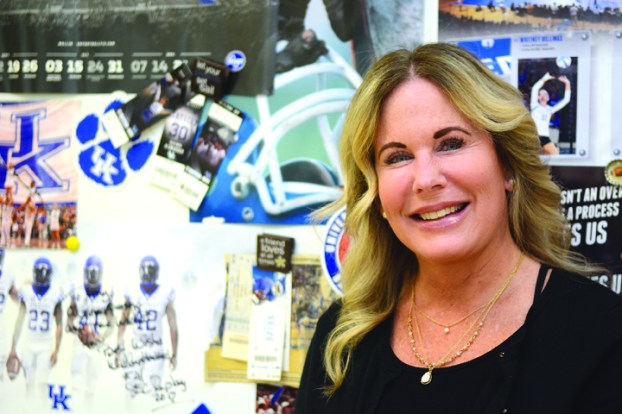 A history teacher at George Rogers Clark High School has been awarded an Earle C. Clements Innovation in Education Award.

Amy Madsen, who has taught history at GRC for eight years, is one of three recipients of the award.

Madsen has taught high school history for 27 years, and she said she enjoys working with young adults.

“I love teenagers,” Madsen said. “They’re creative, funny and trying to figure out their path, and I enjoy being part of that process.”

She said her position as a history teacher allows her to create a unique bond with her students, because they talk about current events, and share interpretations of what has happened in the past.

“There’s a lot of gray,” Madsen said. “It’s not as black and white as 2 plus 2 or a chemistry experiment. The dialogue is different.”

She said one of the most interesting topics of discussion in the past year was the 2016 presidential election, where students’ political passions often led to tense dialogue.

“I honestly respect their opinion and try really hard to foster their free thinking and the fact that they feel safe in here to talk about issues when they come up,” Madsen said.

To Madsen, that’s part of the draw of history.

She said she first became interested in the subject when she was in high school, and she noticed that as society progresses many of the same problems keep coming back.

“Things progress but we still see a pattern to the issues, like gender issues and the economy.”

While studying at the University of Kentucky, Madsen said she met professor Fon Gordon, who specialized in African American history.

“I took every class from her that I could,” Madsen said.

Her studies fostered an interest in Black history that have carried on throughout Madsen’s life. Outside of school, Madsen is a member of the Martin Luther King Jr. Unity Committee, which sponsors the annual Unity Day celebration.

The Clements award recognizes Kentucky’s best educators in history and civics. It is named in honor of Earle C. Clements, who served as governor, representative and senator in Kentucky.

Madsen will receive her award today at the University of Kentucky campus.

A Kentucky native and U.S. Marine Corps veteran has returned to her home state with hopes of challenging U.S. Rep.... read more