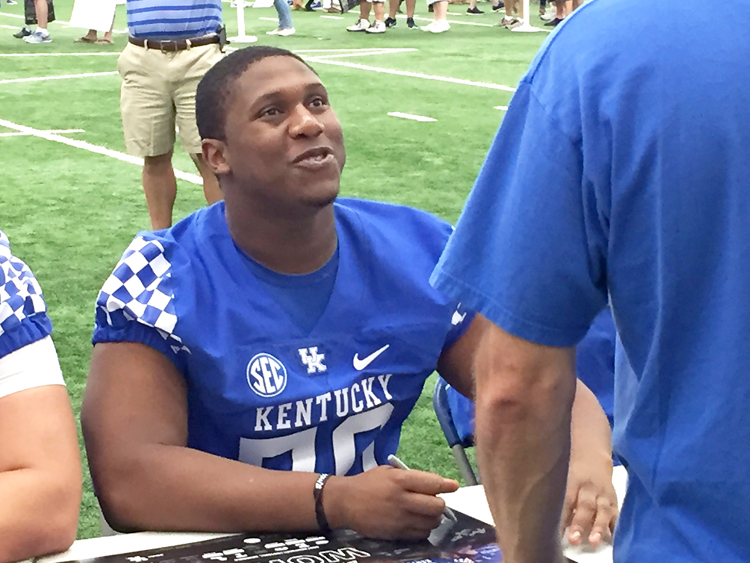 He never played with quarterback Jarren Williams in high school, but Williams’ father, Anthony, saw E.J. Price play when he was a Georgia prep star and knows how good he is.

“He played at Jarren’s high school. This dude is physical and nasty. The best offensive tackle that I have seen in high school,” Anthony Williams said after E.J. Price committed to Kentucky following his transfer from USC.

“It’s an honor for Mr. Williams to say something like that about me,” Price said. “I don’t know him too well, but he has seen me develop and watch me play for a while. He had eyes on me. With his son as dominant as he is, that is high praise coming from a great father. I really commend all he has done with Jarren. Knowing people feel that way about me really makes me feel good. I just always competed and did my best. I didn’t let anything go to my head. I just wanted to do my best.”

He knew early during his freshman year at USC that he was going to transfer. Most consider South Carolina a “heavy favorite” for Price with Auburn next because he had relationships with players at both schools. Kentucky had a scholarship open where he could take a visit and that was eye-opening for him.

Price was briefly committed to Georgia before going to USC. He also had scholarship offers from Alabama, Arkansas, Auburn, Clemson, Florida, Florida State, LSU, Miami, Michigan and others coming out of high school.

During his visit to Kentucky, he was impressed by the emphasis the coaches put on the offensive line and that UK had two 1,000-yard rushers last season. One, Benny Snell, was only a freshman and that means he will still be at UK in 2018 when Price can play after sitting out this season as a transfer.

“I am a good at reading people. If kids are happy with the coaches, you can see it,” Price said. “He has a great relationship with his players. I saw him talking to all of them at breakfast. He is always available. I thought that was pretty cool. I saw Drake Jackson, Landon Young going up and watching film and working on team chemistry in the summer.

“Just me seeing that type of stuff let me know those are the type guys I want to be around. They are really serious about what they are doing and perfecting their craft. That is my mindset and I want others around me with the same mindset. I just fell in love with the chemistry of this team. It’s really good.”