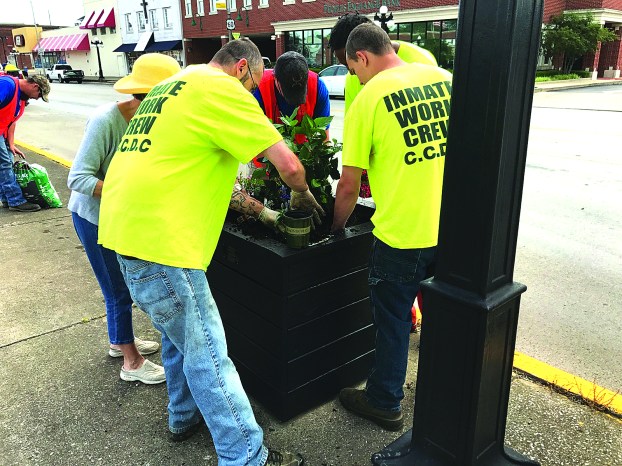 Randy Withrow has been an inmate at the Clark County Detention Center for three months. While you can see Withrow during the jail’s normal visiting hours, most people will see him in jeans, work boots and a bright yellow shirt watering plants downtown or cleaning up along the side of the road as part of the jail’s inmate work program.

Much of the manual labor needed throughout the city during public events or to maintain public places is handled by inmates at the detention center.

In fact, anyone who in the past year has attended the Beer Cheese Festival, Farm to Table dinner or Daniel Boone Pioneer Festival has benefited from inmate labor.

In Clark County, the program sends up to three work crews of three to five inmates each out Monday through Friday, for a possible total of 15 inmates maximum working outside jail walls.

The concept of using inmates to do jobs in the public sector is not new. Across the U.S. inmates have been put to work under various programs. In Tennessee, programs like Take One aim at rehabilitating criminals by partnering them with faith-based organizations for mentoring to find more stability through a job and lifestyle change. In Indiana inmates can qualify for work release with certain companies.

In Kentucky, state prisoners can qualify for work release opportunities as well, but they can also participate in work programs on the local level based on what programs are offered in the county they are serving time in.

The inmate work program was only recently started in Clark County after the election of Jailer Frank Doyle in November 2014.

First, it helps city, county and state government reduce manpower costs for basic jobs like cleaning up litter, setting up tables for events and watering plants.

Second, Doyle says the program helps teach inmates about personal responsibility and imparts some skills they can use to find employment after they have served their time.

The work program brings very direct benefits to inmates as well. Those who volunteer for the program shorten their sentences through regular work. Additionally, inmates do earn some pay for the up to 140 hours a month they work.

According to Chief Deputy Justin Crockett, inmates can earn up to $13 a month for being part of the work program. The money is deposited in their commissary accounts, which can be used to purchase snacks, toiletries or items that may be considered luxuries, like new clothing.

“Some people don’t have any family to send them money while they’re in jail,” Crockett said. “This allows those people who qualify to actually earn some money for themselves.”

Withrow said, for him, the greatest benefit of the program is largely mental and spiritual. Getting to leave his cell five days out of the week and work on something positive makes him feel good, he said.

“Being outside and helping to improve the community is a good feeling,” Withrow said. “And doing good work helps to make you more interested in working steadily after you’re released.”

Withrow said he has worked with crews at other corrections facilities before, and over the course of serving his time he has picked up some new skills he can use to market himself when he is released.

Crockett said that’s one of the things the jail hopes to see come out of the program: inmates learning skills that make them more hireable. While inmates can further their education in jail through getting their GED, the work crew allows them access to skills needed for many entry-level jobs.

“They’re going to be here, so we might as well teach them something,” Crockett said.

The inmate work program is operated through the state department of corrections. State prisoners housed in Clark County can volunteer to be a part of the program if they choose.

Once a part of the program, inmates are required to work an 8 a.m. to 3 p.m. shift five days a week cleaning along roadways, planting and watering city plants, collecting garbage and other jobs.

In the winter, inmates have been put to work assisting city crews with snow removal.

The work crews are managed by Kerry Pelfrey. Pelfrey has 16 years of corrections experience, mostly in Montgomery County. There, he oversaw a similar work program.

Pelfrey is aided by two deputies who take the work crews out each day, and the three maintain constant radio contact to properly manage the crews, he said.

The program does not come without its risks, but Pelfrey said the issues are typically not what the public thinks of. For instance, in his years of overseeing inmate workers, Pelfrey said he has never had anyone try to walk off or escape while outside.

Pelfrey has overseen the program in Clark County for about eight months. Before he took the job, inmate James Bussell was arrested along with Administrative Office of the Courts pretrial officer Daphne Kelley for allegedly leaving his work site to meet with Kelley for sex.

Doyle said none of the meetings happened at the jail, and corrective action was taken as soon as he was made aware of the situation.

Far more often, the problems encountered revolve around just the opposite, inmates trying to bring things back into the jail with them.

“Cigarettes are the most common thing,” Pelfrey said. “We have to search them whenever they come back in for the day.”

In the cases where inappropriate behavior is discovered, inmates will get a write up that is sent to the state. That write up can affect their classification status, making them ineligible to serve on the crews any more.

Doyle said he has received some complaints about letting inmates outside of the jail, but he says the risk is minimal and the cost-saving benefits the overall community.

“These are low-level offenders,” Doyle said. “They haven’t been convicted of violent crimes.”

Withrow, 45, is serving time for parole violation, according to the detention center’s list of inmates.

Many of the participants have been sentenced for non-payment of child support, a fact Pelfrey said brings a tinge of irony.

“Some people don’t pay child support, and they get six months behind and wind up getting sentenced to six months in jail,” he said. “Well, that’s an extra six months he’s not going to work or sending in child support.”

Pelfrey argued that by serving on a work crew, people convicted of non-support are at least giving some value to the community through cheap labor. The work frees up more money that can be put toward public assistance programs that benefit single parents, who are more likely to sign up for such assistance.

Inmates also work within the jail’s walls, Pelfrey said. He heads up a general maintenance crew that includes two members of the inmate work program. The group is the first to respond when lights go out, pipes get clogged or other general maintenance problems arise.

Pelfrey said that the jail always contracts out for professional work when needed, but many issues can be fixed simply by working with the inmates, some of whom have practical knowledge from their backgrounds as handymen or other trade workers.

In addition, a crew of female inmates works regularly to clean and maintain the halls and lobby of the jail itself.

For the inmates who want to work, the program offers a chance to break up some of the monotony of sitting in a cell, and Withrow said he finds it rewarding to do things he was able to do before he came to the detention center.

“I enjoy the work out there, Withrow said. “It’s stuff I did in the past.”

A Clark County farmer died after he crashed his all-terrain vehicle on his property Thursday. William Davis, 76, was pronounced... read more