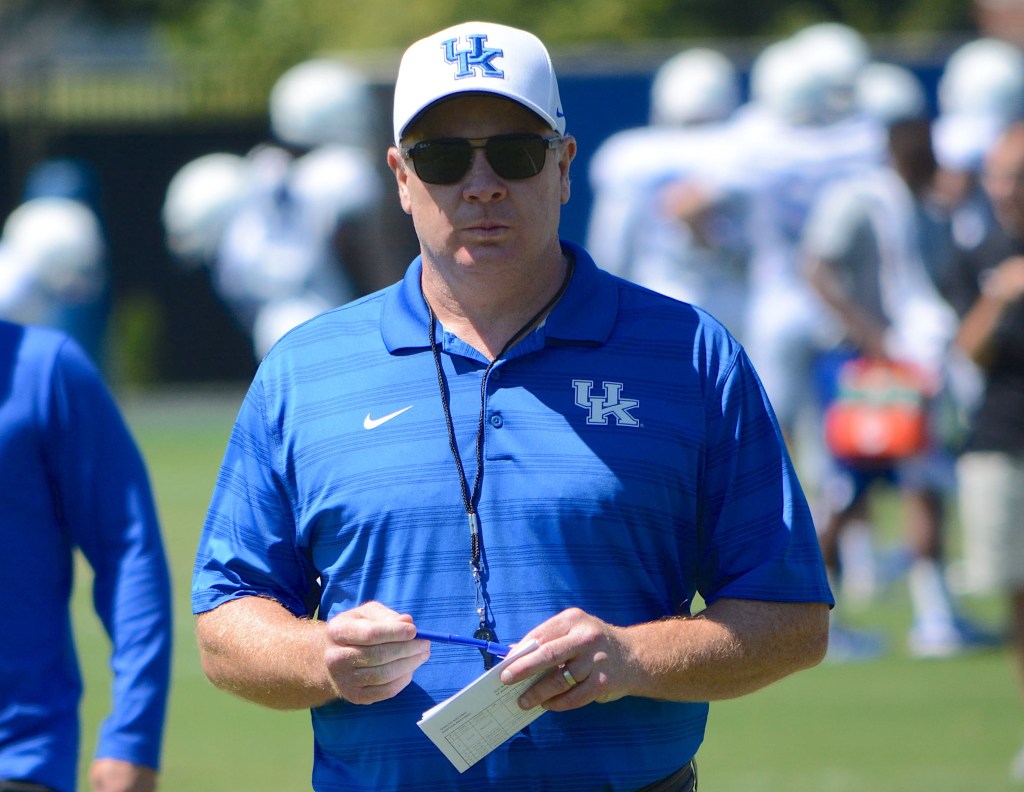 LEXINGTON — Now that Mark Stoops has more of an idea of what his team will look like this fall, he’s glad there’s three weeks left to prepare for the season opener.

“It my eyes, it was an OK scrimmage,” Stoops said Saturday following the first scrimmage of fall camp. “We’ve got a lot off work to do and the good thing is, we’ve still got three weeks (until the season opener). Two weeks would be pushing it and three weeks is a lot of time to get some things ironed out.”

Stoops said both sides of the ball “did some good things at times.” The offense opened with a long drive, before a fumble in the end zone stalled the impressive start. Stoops said the “ball didn’t get into the end zone until later in the scrimmage” and added the performance by his team produced “mixed results.”

“That’s why it’s always hard for me to gauge the success (of a scrimmage),” he said. “You want to see good, hard and clean football. I saw that at times and I saw some things that were sloppy at times. That’s expected the first time you tee it up live. We got a lot of work in and for the most part, came out of it unscathed. It’s a good starting point, but we’ve got a lot of work to do.”

“I thought he was one of the guys that showed up and made some plays,” Kentucky offensive coordinator Eddie Gran said of Bowden. “It’s hard because he hasn’t been here that long, but he went out there and he’s a competitor. He’s one that did show up.”

Overall, Stoops said the defense also was solid during the workout.

“The (offense) did rip off a couple (of long runs) … we saw some second-and long (plays) and that’s what we were looking for,” the Kentucky coach said.

Stoops and Gran liked the way quarterbacks Stephen Johnson and Drew Barker played in the outing. Stoops said both players “showed up and at times made some fantastic throws.”

“They threw into some really tight windows and I like seeing that,” Stoops said. “I like seeing the competitive plays. It’s good defense and offense and somebody making a play. I saw that at times today.”

The scrimmage was the first live action for Barker since he injured his back on the first series against New Mexico State last season.

“It was an OK practice,” the senior signal caller said. “In the first half, offensively we didn’t put the ball in the end zone like we should have, but in the second half, we did. Three out of four (possessions) we had touchdowns. Offensively we could have down a lot better and I know myself, I could have done a lot better.”

Notes: Left tackle Cole Mosier suffered an injury during the scrimmage and Stoops wasn’t sure the extent of the damage. “I’m slightly concerned with Cole Mosier,” Stoops said. “We’ll give you an update Monday and see where he’s at.” … Jaylin Bannerman is seeing some work at tight end after spending time at linebacker last year. … Stoops added that tight ends C.J. Conrad and Justin Rigg as well as receiver Kayaune Ross also were impressive.

Keith Taylor is sports editor for Kentucky Today. He can be reached at keith.taylor@kentuckytoday.com and via twitter @keithtaylor21.