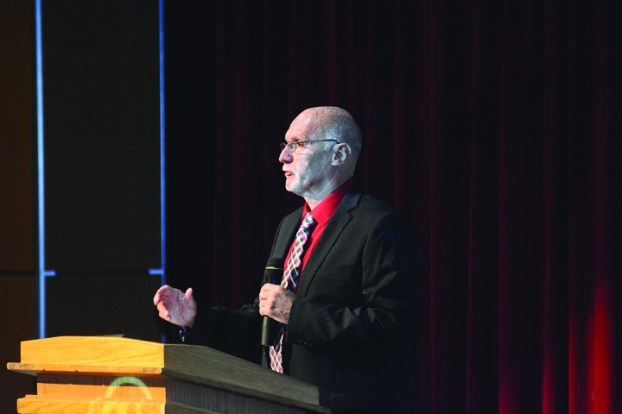 CCPS Superintendent Paul Christy addresses district staff about the changes that have happened in the past four years. (Photo by Seth Littrell)

Christy recalls past, looks to future for CCPS

At that time, the district had recently been redistricted and the future was uncertain in many ways.

Four years later, Christy said the situation has greatly improved. He commended the Clark County Preschool, which he credited as “the epitome of preschool programs.” He also gave credit to the district’s four elementary schools.

The superintendent said elementary staff has worked to level the playing field for students of varying socioeconomic statuses.

“We no longer have the ‘have’ and the ‘have not’ schools, and that’s been a tremendous asset for our elementary program,” Christy said.

Henry E. Baker Intermediate School was recognized as setting the standard in the district for parent involvement, and Robert D. Campbell Jr. High School received credit for being a model used by the state in behavior management programs.

Christy also said the Phoenix Academy will see continued growth in its programs for at-risk youth.

The work done on each level of the education system could be seen through the graduates produced at GRC, Christy said.

“This past year they had their highest graduation rate ever,” he said. “They had the highest ACT composite scores ever, the highest college and career readiness ever, the lowest dropout rate ever. This is truly a place where students can flourish and we’re extremely proud of the work they do there.”

Christy said the district is once again at a crossroads, except this time the issue at hand isn’t changes in the schools, but changes in the way the Kentucky Department of Education will score their effectiveness. He said he isn’t sure what changes will come down from the state level yet, but he is confident the district will be able to meet them.

Following Christy’s remarks, those in attendance heard from Josh Shipp, a speaker and author who has talked to millions of teachers and parents nationally.

Shipp shared his story about his early life in the foster care system and his distrust of adults until he was matched with foster parents who helped him overcome some of his earlier trauma.

He told those in attendance that what children don’t speak out about, they will act out.

“Each kid will so this in their own way, but make no mistake, what kids don’t talk out they will act out,” Shipp said.

Shipp encouraged CCPS employees to give time to students they saw who weren’t getting the attention they needed, and to see actions typically seen as annoying or disruptive as potential hidden assets.

The final performance of “Elvis has Left the Building” at the Pioneer Playhouse Saturday will also mark the end of... read more