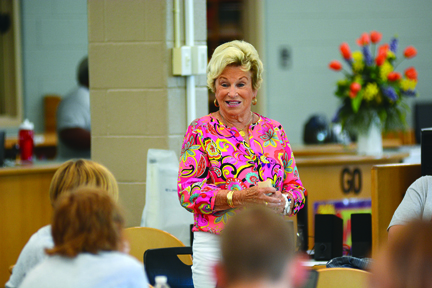 New teachers at Robert D. Campbell High School were greeted their first day on the job by the widow of the school’s namesake.

But Janet Campbell has an impressive history of her own with Clark County Public Schools.

Campbell taught fifth-grade math at Hannah McClure Elementary for 35 years before the school’ closed. After her retirement she continued to work for the district on a part-time basis.

And while she says her days of substitute teaching are over, Campbell still volunteers in the schools sometimes.

“My granddaughters teach in the district, so I volunteer in their classrooms,”

Tuesday afternoon, Campbell told teachers she remembers being in their position. She said she used to teach her students about Hannah McClure, and thinks understanding the namesake of a school building is important for the students inside.

“If you have a class and there’s ever a question about Bob and what he did or how he taught, anything about that, I’ll be glad to come to your class,” Campbell said.

Robert Campbell was principal of George Rogers Clark High School — which was then located in the building that bears his name — from 1968 to 1977, she said.

RDC Athletic Director Ken Howard said after his tenure as principal, Robert Campbell went on to become assistant superintendent of the district and the operations manager.

“Many of you probably don’t have any idea who Bob was,” Janet Campbell said. “But his whole life was built around this school system.”

After his work in the district, Robert Campbell became heavily involved in the Bluegrass Heritage Museum, which now has a room named after him as well.

Janet Campbell said she remembered the decision to name the new junior high school after her husband as a bittersweet one.

“Bob was always about naming schools after historic events,” she said. “He’d probably be mad at me, but they couldn’t have picked anyone who loved the school system as much as him.”

Janet Campbell ended her address to the teachers saying she thought the school was doing a good job, referencing the times she’s seen it in the paper.

“Every time I see that RDC all I can think of is that’s how Bob always initialed all his letters,” she said. “Remember that those kids watch you — everything you do — so be a good example.”

A Winchester man accused of assaulting a man earlier this summer has been indicted for allegedly trying to intimidate and... read more