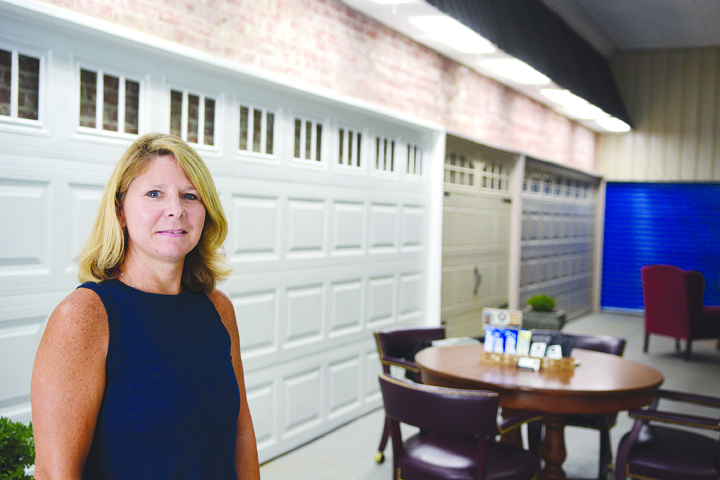 Sherry and Will Richardson found a new home for their business and their family on North Main Street in downtown Winchester. (Photo by Seth Littrell)

When Howard’s Overhead Doors outgrew its original Jefferson Street location after 30 years, owners Sherry and Will Richardson made a bold choice.

The couple bought an old billiard hall on North Main Street, next to Leeds Center for the Arts and directly across from Wizards of Game.

According to Sherry, the choice was different, but it offered an easy-to-find location with plenty of space and without the pricey rents found on Bypass Road.

“We used to get calls from people who were looking for us and wanted to know where we were,” she said.

But Howard’s wasn’t the only thing to move. In June, after six months of renovations to the building, the Richardsons themselves decided to downsize and live in the apartment over the business, which was formerly used as sleeping rooms.

Sherry said the change of pace took a little while to get used to, but as they’ve settled in they enjoy the centralized location in addition to the lack of yard to take care of.

“It’s been a win-win,” she said. “We probably wouldn’t have been able to do that on the bypass.”

The ground floor of the building has been transformed into a showroom, with seven different examples of overhead doors offered by the company.

Howard’s caters to both private and commercial clients’ overhead door needs. Sherry said commercial clients typically look for high visibility glass doors, while a popular choice among homeowners is the carriage-style door with two handles in the center.

Since the move, Sherry said business has been going well for Howard’s and its seven employees.

She said in the future she is hoping to get more involved in the downtown community, working to help market the location to other businesses and customers alike.

The Richardsons are also planning renovations to the building between their office and Leeds Theater, allowing a business to rent the ground floor while turning the second floor into an apartment.