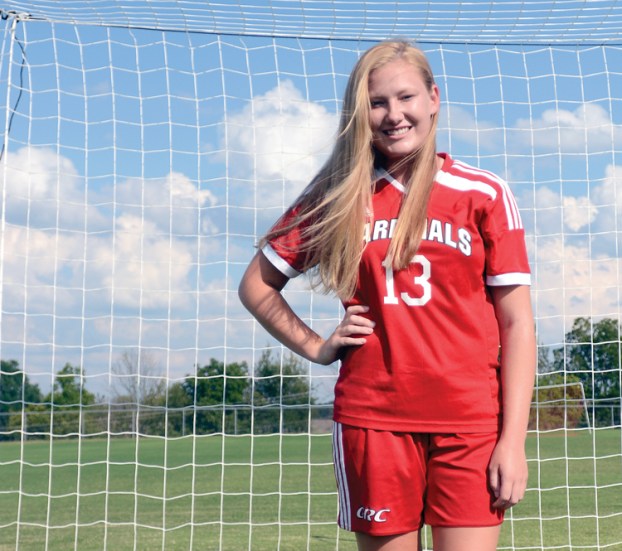 A student-athlete has a number of things demanding focus and attentiong through a season, but for George Rogers Clark High School senior Shannon Ramey, there’s at least one distraction marked off the list.

Ramey was the top goal-scorer for the girls soccer team last season. Her 27 goals helped the Cardinals reach the state tournament, winning a 10th Region Championship and a 39th District title along the way.

She’s play an important role for this year’s team, too, and knowing that, she opted to put an end to any distractions that might be caused by college recruitment.

She signed with Campbellsville back in May.

“Now I can just concentrate on being a senior and not think about college until it’s time for that,” she said.

Ramey and the Cardinals aren’t going to rest on the laurels of last year, hoping to continue to take steps forward.

“We had really good chemistry last year,” Ramey said. “I feel like that’s what took us far.”

GRC lost eight seniors from that team and enters 2017 with a mix of experienced leaders and talented youth.

“We’re playing some girls this year with us losing eight seniors,” GRC coach Matthew Abner said. “Some of the will be getting them to bond with the older players and learning to play as a team.”

Getting that mix to come together will be key if the Cardinals are going to return to the state tournament.

“We’ve been really good together so far,” Ramey said. “I feel like it’s going to work out. We have a lot of young talent coming up. They’ll earn their spots.”

With one regular season game already under their belt — an impressive 6-1 win over Madison Central earlier this week — the Cardinals have show off their depth.

Three different Cardinals scored in the contest — senior Haley Hannon scored on, freshman Leslie Hernandez had a hat trick in her varsity debut and Ramey scored a pair.

“We’ll have to make sure we’re coming together and not have one person trying to do it all on their own,” Ramey said. “If we continue to work together, we’ll go far.”