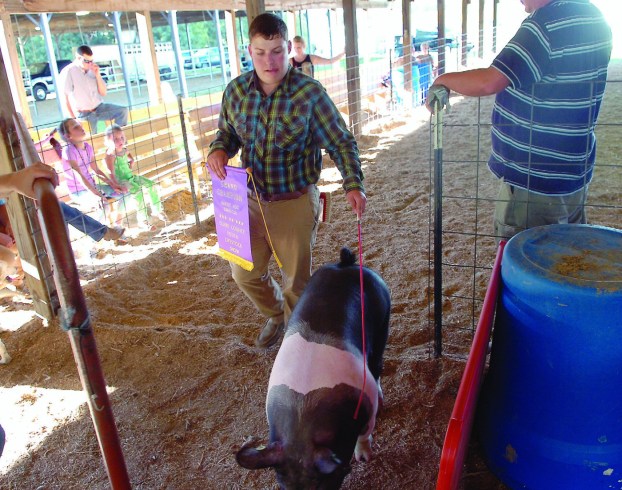 Austin Clark leads his swine “Rootie” out of the show area after being named Grand Champion is the market hog show during the 2016 ClarkCounty 4-H/FFA Youth Livestock Show and Sale. Sun file photo

Clark County 4-H and FFA youth will show and sell animals they have spent a year learning to raise at a livestock show starting 5:30 p.m. Aug. 29 at the Clark County Fairgrounds.

According to Clark County Agent for 4-H Youth Development Heather Cassill, the event will consist of young Clark Countians showing the animals they have raised and then auctioning them off.

Money raised from the sale of each animal will be used to cover the costs of raising or pay for a new animal next year.

“Some are able to put some money back for college education as well,” Cassill said.

This year, 10 students will be competing in the show with sheep and hogs, Cassill said.

She said many of the contestants have already been traveling to fairs across the state competing in livestock shows.

Following the show, dinner will be provided and those in attendance will be able to bid on items as part of a silent auction.

Cassill said the silent auction will include a load of rock from the Allen Company including the haul bill, boots and jeans from Graham’s Boot Store, gift certificates from various businesses and more.

She said the show is sponsored by several local businesses and organizations, which make the event possible.

A partnership between the University of Kentucky and the Girl Scouts of Kentucky’s Wilderness Road Council to make STEM fields... read more