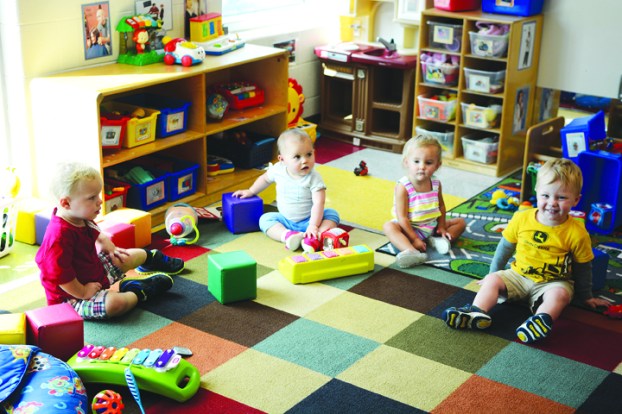 Toddlers play together at the Bluegrass Children's Academy, which has recently earned a fourth star from the state's STARS program. (Photo by Seth Littrell)

The staff of Bluegrass Community and Technical College and the Bluegrass Children’s Academy are planning a celebration to commemorate the day care facility earning four stars through the Kentucky STARS program.

The program is Kentucky’s expanded five-star quality rating and improvement system serving all early-care and education programs — including childcare centers, Head Start and public preschool — that receive public funding. The unified system is based on Kentucky’s Early Childhood Standards and research-based indicators of quality.

BCA Director Becky Mathieu said the achievement represents years of hard work since the academy opened its doors in 2009.

She said the facility has made changes to qualify for the coveted fifth star, but a new ranking won’t be possible until the next year’s inspection of the academy.

During the inspection, state representatives observe the staff of the academy at work for four hours, Mathieu said. They look at how the staff teach, what books they read to the children and several other criteria.

BCA was started to assist BCTC staff and students with childcare needs, but the facility will also take children from community at large.

“It has been a big asset for the college to get quality childcare,” Mathieu said. “A lot of students have been able to get associate degrees and go on to get bachelor’s and master’s degrees with their childcare needs taken care of.”

The Bluegrass Children’s Academy is staffed by eight employees and cares for 35 children throughout the week.