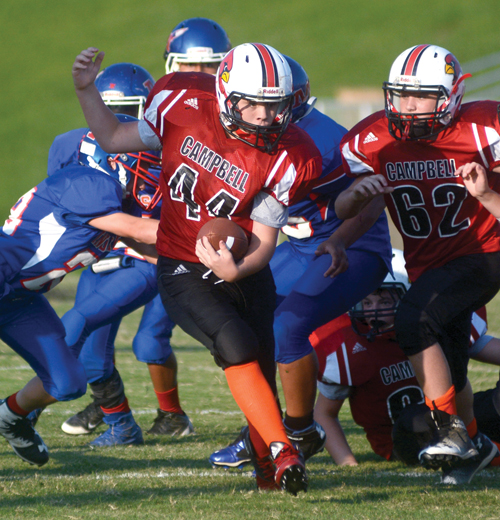 On a night the Cardinals honored a fellow student off the field, they were also impressive on it. The Campbell Junior High School football teams swept visiting McNabb Middle School Thursday at Cardinal Stadium.

Prior to, and during, the game, the Cardinals honored Hunter Cooper, who has been diagnosed with leukemia.

Players and fans wore orange to show support for Cooper. Funds raised will go to help with Cooper’s medical expenses.

On the field, the Cardinals made short work of the Indians. The seventh-grade team won, 26-16, and the eighth-grade team cruised to a 47-8 victory.

Campbell’s Kareen Guerrant started the scoring with a 48-yard touchdown rush in the second quarter of the seventh-grade game. Brady Denham then found Reece Wagner with a 36-yard touchdown pass.

Reshaun Hampton had an interception as the first half came to a close. Lucas Pinckney picked off a pass in the second half.

Guerrant also had a 76-yard touchdown run in the third quarter. Both of McNabb’s scores came late in the game.

In the eighth-grade game, the Cardinals were the model of efficiency, scoring early and often. Jerone Morton scored a pair of 20-plus yard touchdown runs on the first two offensive plays for Campbell.

Jeremiah Mundy-Lloyd had a 34-yard rush for a score. Josh Back threw for a score and a two-point conversion.

In the second quarter, Elias Webb ran for a touchdown and Mundy-Lloyd added the points after. When the smoke cleared, Campbell was up 28-0 at the halftime break. Randarius Parker scored on a 15-yard rush, Mundy-Lloyd returned a kick-off 60 yards for a score and Blake Embry had a 57-yard run for a touchdown.

Campbell hits the road next week to take on Grant County before returning home Sept. 7 to face Elkhorn.