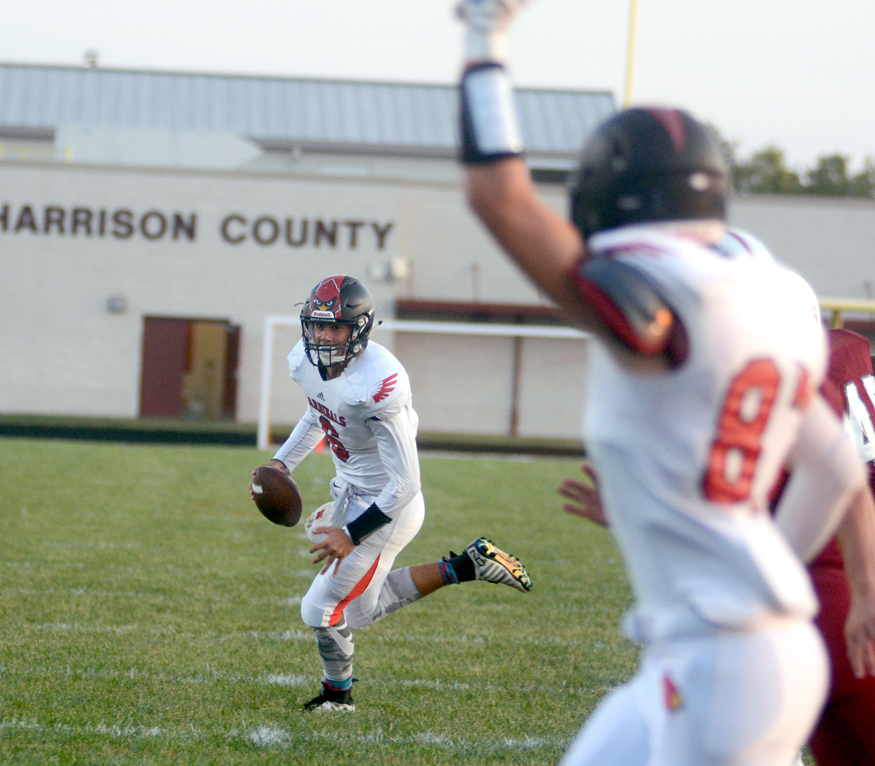 “We started off a little flat,” GRC coach Oliver Lucas said. “But the kids were excited, and they needed a win. I want them to enjoy this, but also we’ve got to win with integrity and we’ve got to feel like we know what we’re doing when we win.”

The 50-6 win was only in doubt for the first 10 minutes. Harrison County’s second drive included a pair of long gains through the passing game. After a score to give them a 6-0 lead, the Thorobreds recovered an onside kick and moved the ball deep in GRC territory.

That’s when the Cardinals turned things around.

The GRC defense roared to life and stalled the Harrison offense, forcing a turnover on downs.

“I’ve got a great coaching staff and the coaches made an adjustment, and that’s what you should do,” Lucas said. “If you don’t make an adjustment, you’re going to lose. The staff made some tweaks and that was the difference.”

Tye Boyken’s point-after kick put the Cardinals up for good, 7-6.

GRC took that one-point lead into the second quarter, where the Cardinals took things to the next gear.

Trevon Jones returned a Harrison punt to near the 15-yard-line, which set up a quick GRC score just after the start of the second quarter. Nitavius Thomas rushed for a score, and Nesbit found Farris for the two-point conversion.

Midway through the period, Jones intercepted a second pass, taking the ball from inside his own 20 to the Harrison 5-yard-line.

“You look at how Trevon (Jones) played and the defense was outstanding,” Lucas said. “So goes our D, so goes everything.”

Again, Thomas punched it in for a score and Boyken’s kick was good.

Leading 22-6, the Cardinals got another big play from Jones, who grabbed his second interception of the night and returned it 44 yards to the Harrison eight-yard-line.

The Nisbet-to-Farris connection couldn’t even be denied by a deflected pass, as Farris nabbed the ball before it hit the ground.

Nisbet then hit Farris Shakadih for the two-point conversion.

Nisbet found Farris again with 4:26 still to play in the first half, this time on a short pass, but Farris found open field and raced to the end zone and a 36-6 lead.

A minute later, Ethan Thomas picked off a Harrison pass. That set up a drive that ended with Nisbet throwing to Nick Willoughby for a 12-yard touchdown. GRC was up 44-6.

Thomas added a 20-yard touchdown run on the opening drive of the second half, putting GRC up 50-6.

Farris was named the Alumni Bowl’s MVP, but a number of Cardinals could have been given the honor Friday.

Thomas had three rushing touchdowms. Jones had a pair of interception returns and one punt return that set up short fields for the offense.

Nisbet threw for four touchdowns and a pair of two-point conversions.

“Big players make big-time plays,” Lucas said. “That’s the thing I try to get our kids to do. You’ve got to make your plays when it’s your time. That’s all we ask you to do. We don’t want you to be anytone else. We want you to do you.”

This week was the first of three on the road for the Cardinals. They will travel to Dunbar next week. Dunbar was shut out 50-0 by Southwestern in their season opener Friday.

GRC will be in Mount Sterling to take on Montgomery County on Sept. 8, before returning home to battle Grant County Sept. 15. 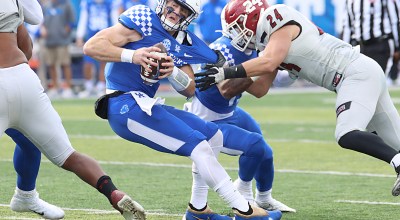