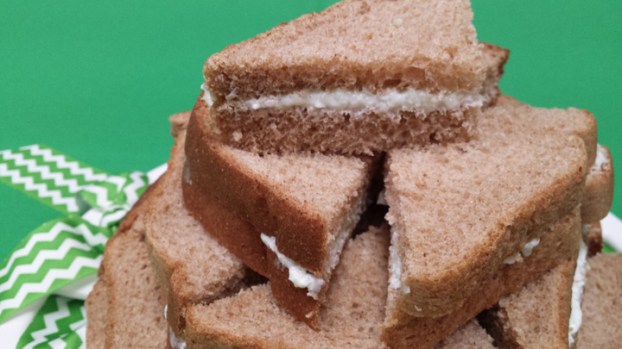 Extra cucumbers save the day for Benedictine

Our church was planning a retirement celebration for Dennis Wainright, one of our ministers who has given 40 years of service to our church and community.

The reception organizer, Sandra, called and asked if I would be willing to help her by making Benedictine. I said I would be glad to help in any way I could. Sandra said she would get the recipe to me and all I would need to do was make the Benedictine and then on the day of the event, put sandwiches together right before the reception.

A couple of weeks before the event, Sandra gave me the ingredient list, which made two cups, and asked me to triple it. There were no instructions, just the ingredients on the list. Since I have never eaten Benedictine and don’t ever plan on eating Benedictine, I didn’t know if the cucumbers were supposed to be in chunks, smashed, shredded or what. I hopped on the Internet to do a search and found all kinds of recipes. Some said to chop the cucumber and some said to puree it, so I was back to the drawing board.

The day before the reception, I went to the grocery store and bought all the ingredients I would need. Since English cucumbers have fewer seeds I opted to purchase three of them. They were extremely long and I figured there would be more than enough cucumber for tripling this recipe.

That evening, as I was getting ready to make the Benedictine, I still hadn’t decided how to prepare the cucumber. I called my mom, who isn’t a cook, but has eaten Benedictine, to see what her recommendation was. She said she didn’t think it would matter.

After thinking a bit, I called my cousin Terri because I remembered her saying she likes Benedictine. She said she had not had it on bread, but she liked it as a dip and if I cut the cucumber into chunks they needed to be small, but the consistency should be pretty smooth.

I texted Sandra for her opinion but didn’t hear back from her right away.

The cucumbers were so large I decided two might be enough, so I peeled and seeded two of the cucumbers. Since I had two recommendations, I went with chopping the cucumber up into tiny chunks using one of my handy dandy kitchen chopping tools. When using the chopping tool, there was quite a bit of liquid that developed and I used paper towels to sop up as much as possible. I didn’t want to take a chance that the end product would be runny.

I grated the onion, which made a juicy mess, and made me cry; then I just put everything in a bowl and mixed it up.

I was hesitant to use 1-1/2 teaspoons of the salt, but that is what the recipe called for, so in it went.

When everything was mixed, I asked Brad if he would mind tasting it to see what he thought.

After a tiny taste he said “it’s salty.”

OK, so now what was I going to do? You can’t undo salt.

Since I still had 1 English cucumber left, I peeled, seeded and chopped it up. I added about half of it to the mixture and had Brad taste test again. He said “more cucumber.” So I added the rest of the cucumber and once again he said “Still salty, I think it needs more cucumber.”

I was now out of English Cucumber.

I opened the refrigerator and found a couple of cucumbers from our garden in the crisper. I peeled, seeded and chopped both of them and ended up adding all of it to the Benedictine. With one last taste, Brad gave it a thumbs up.

The Benedictine went into the refrigerator and I headed to bed.

After church on Sunday, a team of women was preparing all kinds of food for the reception. It was my job to spread the Benedictine on wheat bread and cut each sandwich into fourths, placing them on a pretty plate for serving. I only used about half of the Benedictine for the two loaves of bread earmarked for Benedictine.

During the reception, several people mentioned the Benedictine and each time I asked “how was it,” I only heard good things (only a few people knew I’d made it). Sandra just said “Yum.”

The reception was well attended and everyone should have left with a full belly since there was so much food along with a beautiful cake by Brenda Herrington, to boot.

After cleaning up, I had to figure out what I was going to do with the leftover Benedictine.

Brad said we didn’t need to take any home because he had enough for a year. After a little thought, I decided to take some to my cousin, since she loves it as dip, and then stop at my neighbor’s house and see if they would like some.

Terri was taking a nap, but her husband agreed to take some. To my disappointment he only took about a cup of it and said “that’s plenty for us.”

Thank goodness when I arrived at our neighbor’s house Rachel tasted it and agreed to take the rest of it off my hands. Though she did mention she would have rather had it smooth, with no chunks in it.

So with lots of favorable opinions, I’ll say I nailed this recipe and it will be added to my self-made cookbook for a future party.