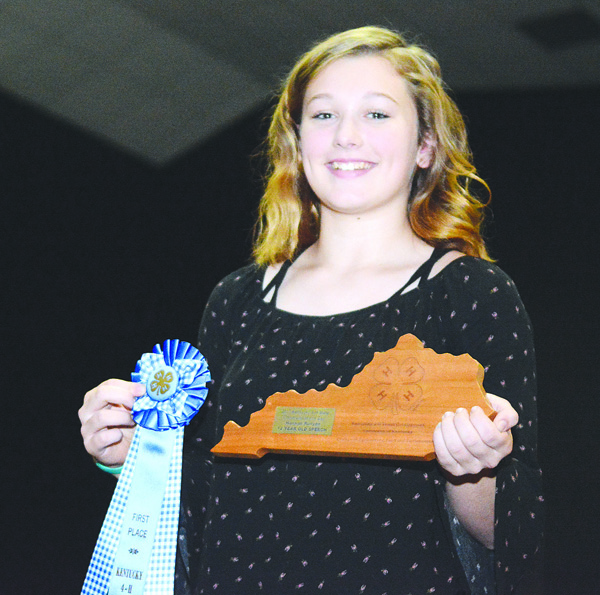 Hannah Runyon poses with her awards from the state 4-H speech competition. (Photo by Seth Littrell)

Runyon said her speech was about Pocahontas and the ups and downs of her life.

“I think her life needs to be heard about,” Runyon said. “She was kidnapped at 9, married at 9 and saved a man’s life.”

Runyon took part in the public speaking competition as part of a class required of Calvary’s middle school students.

Runyon said she was inspired by the story of Pocahontas while studying her in history class.

Runyon said she worked in several different classes to put her speech together, including history, communication and English classes.

After winning a competition at the school, Runyon went on to compete at the county, area and eventually state level, going up against more than a dozen other students her age at each round.

She said the pressure was greatest before she gave her speech at the state competition, which took place at the University of Kentucky. Once she started, however, she said she was comfortable because she wasn’t required to use a microphone.

When she found out she won the competition, Runyon said she was surprised because of the interesting speeches her competitors gave.

“One girl did a speech on the Golden Girls,” she said.

While her first speech competition was required by a class, Runyon said she intends to compete again in the future because she enjoys the challenge.

“I like getting up in front of people and telling them my speech,” she said. “It’s fun for me.”

Man gets 10 years for Winchester robbery

A man charged with robbing a Winchester check cashing business and a number of other businesses in the region was... read more