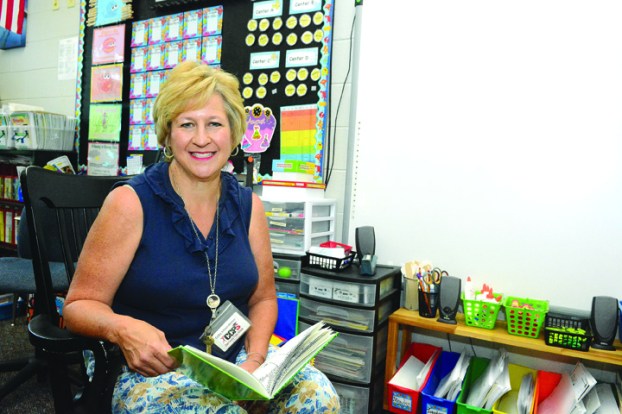 When it comes to hands-on learning, Shearer Elementary School first-grade teacher Cathy Schwendeman says the mess is worth it.

“We’ve got to get back to gluing and pasting more in these lower grades,” Schwendeman said. “We just have to.”

In her classroom, students go to hands-on centers when they are learning reading, math and other subjects that allow them to make a physical connection with ideas they are working on.

Schwendeman said much of the foundation students have for understanding concepts comes from physical interaction.

She and her students work on puzzles, cutting and pasting and matching shapes as well, exercises that tach students not only about fine motor skills, but also about understanding spatial reasoning like volume and area.

It’s a concept that may seem trivial to many adults, but something important for young people to learn early on.

“If you show a student a five it means nothing to them, it’s just a symbol,” Schwendeman said. “But if you put five blocks down or five cars down they understand. They’re concrete learners at this age, they need to touch it, feel it, see it to learn it.”

Schwendeman has been teaching at Shearer for four years and has been a teacher in the Clark County Schools district for a decade.

Prior to being a teacher, Schwendeman earned a business degree from Eastern Kentucky University and worked as an accountant for a bank. After she had children, Schwendeman said she took a part-time job as a real estate appraiser so that she could spend more time with them from infancy to elementary age.

During that time, Schwendeman began volunteering at her children’s school and found that she enjoyed what she was doing there. That inspired her to go back to school to become a teacher.

She said she loves working with first-grade students, and wishes to continue teaching at that level for the duration of her career.

“They haven’t been set in their ways and can still be molded a little,” Schwendeman said. “They’re eager to learn and not burned out on school yet.”

She said her favorite part of the job is the unpredictability the students bring.

“There’s never going to be a boring day,” she said.  “If you don’t want to be bored come work at a school.”

When she isn’t teaching, Schwendeman said she enjoys working on her French Avenue home and tending to her flower garden. She is also active at her church, Emmanuel Episcopal.