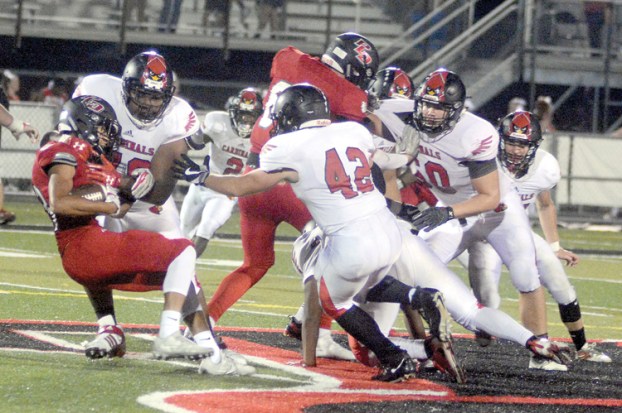 With heavy rain expected today, officials decided to move GRC’s meeting with Dunbar to Thursday and the Cardinals were more than up to the task, winning 17-0.

“That says a lot about your defense. The defense is going to carry us,” GRC coach Oliver Lucas said. “I’ve always said the defense is special. The whol defensive staff did a great job.”

Offensively, the Cardinals struck in the second quarter. After a 34-yard pass to Seth Boyken, Nitavius Thomas scored on a 1-yard touchdown run.

Thomas had a 42-yard run on the opening drive of the second half that set up a 34-yard field goal by Tye Boyken. Thomas scored again in the final three minutes of the fourth quarter to give the Cardinals 17 points.

Still, the Cards were a bit inconsistent. A 50-yard touchdown run by Thomas in the first quarter was called back because of a penalty.

GRC also had three fumbles — and lost all three.

“Offensively, we have to stop shooting ourselves in the foot,” Lucas said. “It’s still a work in progress, but we’re making mistakes we shouldn’t make.”

Even with short fields, the Cardinals were able to stop Dunbar from threatening. While the running game behind Thomas and Martavious Hooten allowed GRC to burn clock after the Cardinals built a lead, there were a number of dropped passes and off-target throws.

“Our passing game wasn’t on tonight,” Lucas said. “But we’re go back to the drawing board and come up with some things.

The shutout victory was the first for GRC since 2008 — when the Cardinals opened the season with shutout wins over Montgomery County and Harrison County.

“They (defense) were dialed in,” Lucas said. “I told them they have to play hard, like they want a shutout, not thinking we  were going to shut them out. Play hard like you want a shutout and a shutout will happen.”

The win pushes GRC to 2-1 on the year. This is the first time the Cardinals have been over .500 since winning the season-opener in 2013.

The back-to-back wins for GRC are the first since the Cardinals ended the 2014 regular season with three straight wins.

The chance to match that streak comes next week when GRC travels to rival Montgomery.

After the trip to Mount Sterling, the Cardinals return home to face Grant County Sept. 15.