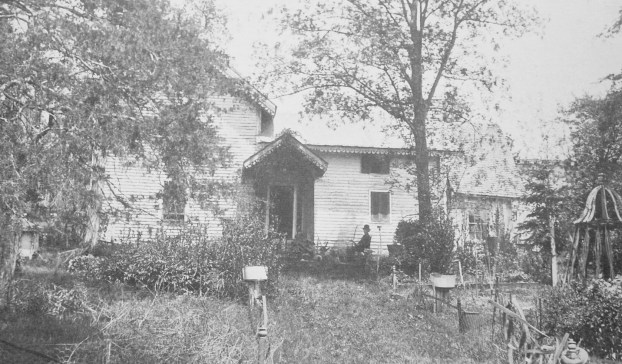 Where in the World: Keeping up with the Joneses

Joan Pursley Mayer, who grew up in Clark County, has penned a memoir entitled “Of Family and Place.”

Her book of memories, written for her children and grandchildren, relates many adventures of her parents, Fauntleroy and Charlotte (Bowman) Pursley, in the Iroquois Hunt Club. The book is a most enjoyable read.

Joan also provides a history of the hunt country as well as the whole area of southwest Clark County. Part of that history journeys back in time to tell the stories of her ancestors who settled there. This column focuses on one of those lines, a branch of the Jones family that arrived in this county just after 1800.

While researching her family history, Joan was aided by a classic work of genealogy: “Captain Roger Jones of London and Virginia,” written by Judge Lewis H. Jones of Clark County in 1891. His tome provides the record of seven generations of her Jones family in America. Joan’s narrative adds five more generations of her family, making a remarkable 12 generations in all. I will note each in turn, but the main focus will be the Joneses who settled in Clark County.

The progenitor of this family was Roger Jones (1625-1701), an immigrant of Welsh descent who came to America with his wife, Dorothy Walker before 1680.

Their son Col. Thomas Jones (d. 1757) married a widow, Elizabeth Pratt, who was the daughter of Dr. William and Elizabeth (Catesby) Cocke of Williamsburg, Virginia.

The eldest son of Thomas and Sally, Maj. Thomas ap Thomas Jones (1755-1800), earned his rank in the Revolutionary War. He inherited the family seat, Bathurst, in Essex County, Virginia. Thomas married Frances Carter, a granddaughter of Robert “King” Carter, who was reputed to have once been the richest man in Virginia.

Thomas ap Thomas Jones (1784-1843), who represents the fifth generation, married Elizabeth Fauntleroy, a daughter of Griffin and Margaret (Murdock) Fauntleroy of Richmond County, Virginia. Thomas sold the family seat, Bathurst, and moved to Kentucky in the latter part of 1810.

He purchased and farmed several large tracts of land between Lower Howard’s Creek and present-day Jones Nursery Road, all north of Athens-Boonesboro Road.

Thomas established a family reputation for integrity, intelligence and generosity. His wife, Elizabeth, outlived him by 22 years. They are buried in a small graveyard west of Combs Ferry Road.

Thomas and Elizabeth had nine children. The eldest, Frances, died of consumption in 1833. Son Joseph Lewellin died in infancy.

Son Thomas ap Thomas Jr. moved to Missouri, where he served as a Confederate soldier.

Son Cad Jones, a bachelor and attorney, served five years as clerk of the county court and died in 1862.

Son Joseph acquired Caveland, home of Gen. Richard Hickman built in 1797, and was a successful farmer; his sons operated the Jones Brothers Warehouse in Winchester in the late 1800s.

Fauntleroy Jones (1816-1897) married his neighbor, Martha Jane Browning, a daughter of James and Jane (Morrow) Browning. Fauntleroy was one of the most enterprising citizens of his era. His business life began with failure as he acquired the ill-fated ropewalk and bagging factory in Winchester that had been the downfall of David Dodge and, in turn, cost Fauntleroy a considerable fortune. His obituary in the Winchester Democrat describes how he managed to recover from that reversal:

“He obtained permission from his mother to plant the beginning of a nursery on an extreme corner of her farm. He built a shop close to his little cabin home. He employed a man to work in it and from him he learned the trade of a wheelwright. He worked by day in his nursery and at night by lamp light or candle light at his trade, making large spinning wheels on which servants used to spin yarn, and smaller wheels for spinning flax. He made chairs also which then brought higher prices than similar articles now bring, also the tall old fashioned bedsteads, which he turned on a turning lathe at which he became very expert.”

Fauntleroy eventually became a learned horticulturist and the most noted nurseryman in Kentucky. It was said that most of the old orchards in Clark and neighboring counties were supplied from Jones’ Nursery. Fauntleroy also had a blacksmith shop with five employees, where he manufactured wagons and sleighs. He was postmaster of the Jones Nursery Post Office from 1850 to 1859.

When the Civil War broke out, Fauntleroy was a Union man. But their harsh treatment of Kentuckians during the conflict caused him to sympathize with the Southern cause, which resulted in his arrest and imprisonment for a time in Lexington.

In 1885, Fauntleroy deeded most of his 220-acre farm to his five surviving children, reserving Nursery Place for himself and Martha Jane.

Their son Francis “Frank” served in the Confederate army under John Hunt Morgan. After the war, he graduated from the University of Louisville medical school and became a practicing physician in the Becknerville area.

Son Lewis, who wrote the Jones history, studied law at Transylvania University and became a judge before giving up the profession to become a Christian Scientist practitioner and educator in Louisville. Daughter Alice married Lewis Woodford, the only son of S. A. B. Woodford, and they lived at the Woodford homeplace, Possum Trot, on Combs Ferry Road (now the Venable home); he is buried there and Alice is buried in Winchester Cemetery.

They set up housekeeping at Nursery Place, and their daughter, Mattie (1869-1927), was born there.

Joan is the 10th generation in this Jones line. She has two sons, John and Mark, and three grandsons. Joan lives at Nursery Place.

The Boone family in Clark County

By Harry Enoch It is hard for me to believe I’ve lived in Clark County almost 18 years now —... read more