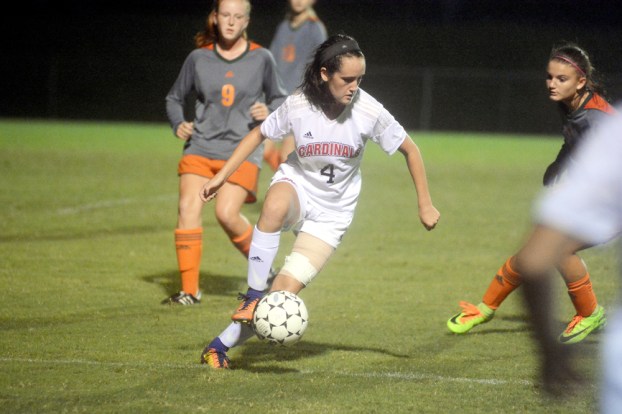 Through eight games this year, the George Rogers Clark High School girls soccer team has been impressive. The Cardinals topped Frederick Douglass Saturday night in Winchester with a 5-0 win.

No. 9 GRC sports an unblemished 8-0 mark on the season. The Cardinals have won their past two games with shutouts.

Through the first eight games, GRC is averaging more than five goals a game and surrendering just more than one score a contest.

Saturday night, GRC controlled the action most of the game and pressured the Bronco defense.

“We controlled possession and were able to break down their defense to get control of the game,” GRC coach Matthew Abner said.

Shannon Ramey had a big night. She scored a pair of goals and had two assists, all of which came in the first half.

She assisted a Delaney Manning goal in the opening seven minutes, then helped on a Leslie Hernandez goal five minutes later.

Ramey found the back of the net around the 30-minute mark then again just a minute later. Her second goal was assisted by Julia Pohl.

In the second half, Maddie Mann scored unassisted.

Keeper Laura Martin had two saves and earned the shutout.

Next up for GRC is a battle of Cardinals when Scott County (3-3) visits Clark County Wednesday night.

“I am pleased with how we are playing right now,” Abner said. “Next test is Scott County.”

Shelby Vaught scored three goals to lead the Cards. Julia Pohl scored a pair and had an assist.

Vaughn, Paiton Marcum and Autumn Scott had assists in the win.

Keeper Ruthie Houston had three saves and earned the shutout.