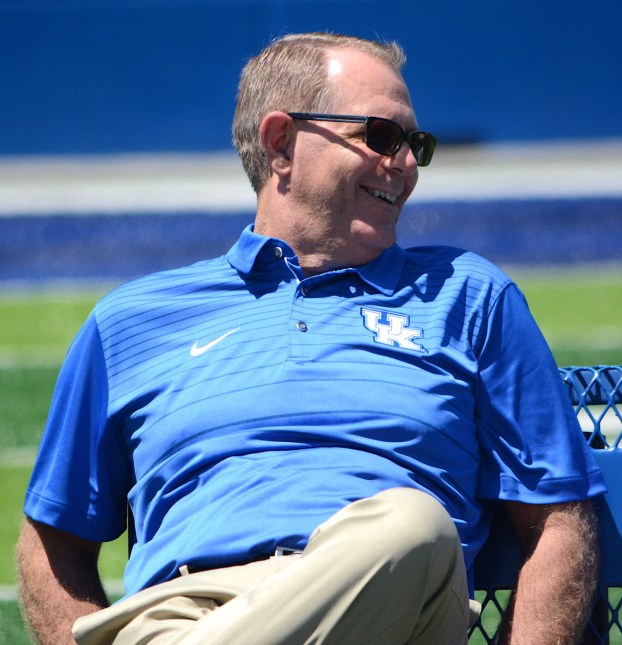 LEXINGTON — After Eastern Kentucky University dismissed Dean Hood following the 2015 season, the longtime coach packed up his family and moved to Charlotte for a season of unexpected restoration and renewal.

At the time, Hood, currently outside linebackers and special teams coach at Kentucky, thought Charlotte needed his expertise. It turns out he needed to move out of state to help rid himself of the bad feelings he harbored following an eight-year stint as coach of the Colonels, which included a pair of Ohio Valley Conference championships and three playoff appearances.

“I’ve moved past that,” said Hood, who compiled a 55-38 record at Eastern. “Charlotte helped that, with a lot of bitterness and some of those kinds of things that happened with those situations. When we took the Charlotte job, I thought the Lord needed us to do something in Charlotte. The Lord needed us to be in Charlotte to do something in us. That really helped us move past all of that. My wife (Crystal) and I moved past that and healed those wounds.”

Hood isn’t sure how he will feel when the Colonels take on the Wildcats in Kentucky’s home opener set for noon Saturday at Kroger Field. What Hood knows is that he won’t get caught up in the past even though he nearly led the Colonels to an upset of Kentucky, before the Wildcats escaped with a 34-27 overtime victory over Eastern two years ago.

“This is a fresh start and there are a lot of kids on that team that I love, but when you’re preparing it’s just another opponent, 11 guys out there and to see how they structurally line up, how you need to attack them and what you need to do to have success.”

“I went from being responsible for every thing short of world-hunger to coaching outside linebackers and special teams,” he said. “It was refreshing in Charlotte, not having the responsibility of being a head coach and it’s the same here. It’s getting back to why you got in (to coaching).”

Although being a head coach and being in charge of his own program had its perks, Hood missed being an assistant and the closer relationships with the players and the coaches.

“When you become a head coach, you can really get bogged down by just the responsibility of every human in the organization,” Hood said. “You lose track of the relationships in a meeting room with individual group of kids and also the camaraderie amongst the coaches. You can create as much unity-type outings and things as a head coach to try to let them know, ‘hey, you know, I’m just one of the guys, you’re still head coach.’ You kind of miss that camaraderie with assistant coaches and that’s being refreshing for me to get back and have that type of relationship with the players and the coaches.”

Hood added the move back to being a position coach was a refreshing change. During his one-year stint at Charlotte, Hood coached tight ends, allowing the longtime defensive coach, an opportunity to learn more about the offensive side of the football.

“It rejuvenates you, it’s a learning curve and humbles you as well, because you are dependent upon other people to learn, as opposed to when you kind of felt like you were close to mastering something and had a way of doing things,” Hood said. “It’s been good.”

Hood’s family also easily adjusted to living in two cities and getting used to their new home in Nicholasville. Hood’s wife Crystal’s family reside in Richmond, allowing his wife to be closer to their grandparents.

“We didn’t now how (the kids) were going to respond,” Hood said. “They adjusted well in Charlotte and it was tough. When I took the EKU job, my kids were 6, 4, 2 and a newborn. Richmond, Kentucky was all they knew. Charlotte was a huge adjustment, but they did well there and thrived. When coach Stoops called and we told them, we didn’t know how they were going to react, but they were so ecstatic.”

Now that he’s settled back into the Bluegrass State for the third time in his coaching career, Hood has no immediate plans of being a head coach again. Hood never says never, but for now, he’s happy at Kentucky.

“I haven’t thought about it for a second,” Hood said. “My thoughts have been, ‘wow, I really need this,’” Hood said. “You don’t realize it when you’re in it. I running on high octane and maybe burnt out a little and didn’t even know it. All last year and this year there hasn’t been a thought of, ‘I wish I was a head coach again.’ It’s more like, ‘I’m really enjoying this and having fun again.’”

As his faith has grown during the past two years, Hood also enjoys spending more time with his family and creating a healthy balance in his personal and professional life.

“The whole job, being a dad, a husband and all that is sitting right on top of faith,” he said. “That’s the only balancing act to it. Sometimes life, as they say is the size of a mustard seed. You’ve got all that stuff balancing on that little bitty thing, but it holds up when you’ve got just a little bit (of faith).”

Above all, Hood credits his relationship with God as a big reason he’s focused on the future and not the past.

“You’re disappointed, but God works you through all of that,” Hood said. “Charlotte was perfect for us because of the people that we there, the situation, getting away and then coming back.”