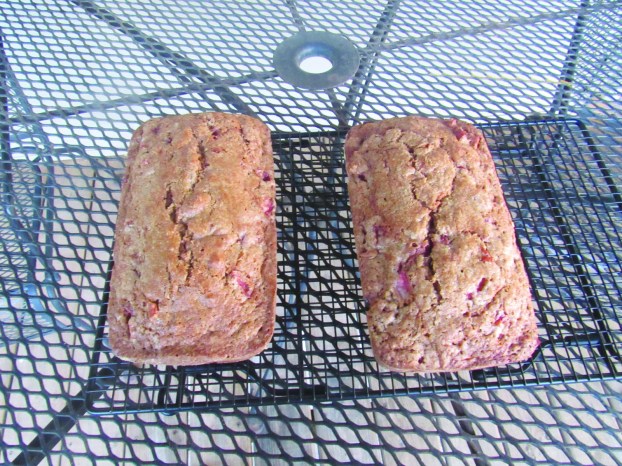 I found today’s recipe while looking at Brad’s Facebook page.

When I clicked on the recipe I was taken to the allrecipes.com website. The picture of the bread looked good and after reading the recipe I thought this was something I might make some time, so I printed the recipe and put it in my dessert folder for a future date. One day, when I had a bunch of strawberries in the refrigerator and needed to do something with them, I pulled this recipe out of the folder.

Before putting this recipe together, the first thing I did was grease the two loaf pans with shortening and dust them with flour. The recipe said to grease with butter, but I’ve done that in the past and things stuck to the pan.

After removing the green tops from the berries I cut them up. I had no idea what size the strawberry chunks needed to be so I ended up with all sizes. The recipe says to sprinkle them with a little sugar and set them aside. At this point I wondered if I was supposed to sprinkle them with some of the sugar called for in the recipe or if I was supposed to use additional sugar. After about five seconds, I decided to use additional sugar. I just scooped a little bit out of my sugar canister and sprinkled on how much I thought was enough.

Then I stirred the strawberries to get them all coated. Next, following the recipe directions, I put the dry ingredients into what I thought was a large bowl and stirred everything up. The next step was to combine the eggs and the oil. I’d forgotten that we only had “farm fresh eggs” that I’d purchased from one of our neighbors who has chickens. So I had to rinse the eggs before I could use them. I like having farm fresh eggs, but I don’t like rinsing the “stuff” off of them -— it just gives me the heeby jeebies for some reason. Before I went any further, I washed my hands, thoroughly. After combining the eggs and oil, I poured the mixture over the strawberries and stirred.

The mixture was a light brown color, which I didn’t expect, thanks to the cinnamon. I poured the batter equally into the two loaf pans and put them in the oven, set the timer for 45 minutes, then started fixing supper.

When the timer sounded, I used my cake tester to see if the bread was done, but it wasn’t. I set the timer for an additional 10 minutes. It still was not completely done, but close. After another 10 minutes the bread was ready to come out of the oven.

When the bread had cooled a few minutes, I dumped both loaves out onto a cooling rack.

About that time Brad asked if we were going to give it a try. I told him I thought we should wait a few more minutes for it to cool a bit.

Before the bread was completely cool, I had to go ahead and slice both of us a piece with a serrated knife. It smelled so good!

Brad put butter on his piece and I ate mine plain. As I bit into the end piece (I like the end pieces, just like I like the corner pieces of baked goods) I told Brad I might have baked the bread too long. I thought it was a little dry. He said maybe I should have melted butter and poured it over the top like I do banana bread. I just looked at him.

We both really liked this bread, the strawberry/cinnamon made for a great combination of flavor.

The next morning I had another piece of the strawberry bread for breakfast. It didn’t seem dry at all, so maybe just the end piece was just a little dry.

Since this recipe made two loaves, I wrapped one up and put it in the freezer for another day.

I’ll have to say I nailed this recipe and it’s going into my self-made cookbook.

Even though Brad thinks it wouldn’t hurt to pour a half stick of melted butter over top of the loaves, I think it’s just fine without it.

Preheat oven to 350 degrees. Butter and flour two 9×5 inch loaf pans. Slice strawberries and place in medium size bowl. Sprinkle lightly with sugar and set aside while preparing batter. Combine flour, sugar, cinnamon, salt and baking soda in a large bowl; mix well. Blend oil and eggs into strawberries. Add strawberry mixture to flour mixture, blending until dry ingredients are just moistened. Stir in pecans. Divide batter into pans. Bake in preheated oven until a tester inserted in the center comes out clean, 45-50 minutes (test each loaf separately). Let cool in pans on wire rack for 10 minutes. Turn loaves out of pans and allow to cool before slicing.

Extra cucumbers save the day for Benedictine

By Sarah Condley Our church was planning a retirement celebration for Dennis Wainright, one of our ministers who has given... read more