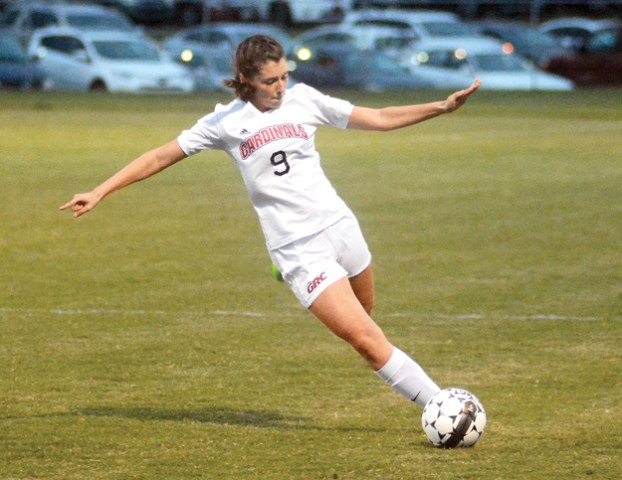 The George Rogers Clark High School girls soccer team was a bit slow out of the gate Wednesday night against visiting Scott County.

Madeline Mann broke a scoreless tie in the 12th minute when she scored off a rebound. Shannon Ramey’s initial shot was knocked away by the Scott County keeper but Mann scored the loose ball in front of the net.

Kathryn Gallenstein made it 2-0 with 20 minutes left in the half off an Allie Bush assist.

Seven minutes later, Ramey scored on a long shot near the edge of the box, giving GRC a 3-0 lead.

Bush added the fourth goal and Ramey scored again, both coming in the second half.

The Cardinals showed off their depth, keeping the pressure on the Scott County defense even while making substitutions.

“I want to say we have about 15 I’m very comfortable with switching at any time,” Abner said. “Our second leading scorer (Leslie Hernandez) comes off the bench. She could be starting for us. I could put her as a starter just as easily.”

But using a rotation of players, Abner keeps his side fresh while not giving the opposing defense a break from constant pressure up front.

“It allows me to keep Shannon (Ramey), Delaney (Manning), Hayley (Hannan) fresh,” he said. “It keeps our midfield fresh.”

While Scott County mounted very little offensive pressure, the  Cardinals are no slouches. They came into Wednesday’s contest with a 3-3 record and hot off winning the Kentucky Bank Labor Day Shootout in Bourbon County over the weekend. They defeated Apollo and host Bourbon County.

“This is a solid win. After seeing them win the Bourbon tournament, it’s a good win,” Abner said. “This is a positive for us as we go into district play.”

The win keeps GRC undefeated on the season with an 8-0 record. The Cardinals remain in the state’s Top 10, holding on to the No. 9 spot in the Maher rankings.

A tough stretch looms for GRC. No. 29 Woodford County (4-2) visits Saturday with kick-off set for 5 p.m.