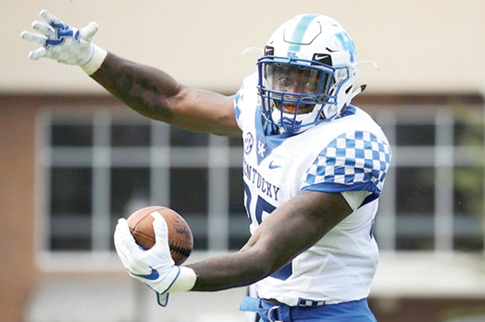 In the last meeting between the two teams, the Wildcats needed overtime to fend off the Colonels, escaping with a 34-27 victory, despite trailing by a pair of touchdowns in the fourth quarter.

A lot has transpired since then and the coach who nearly directed Eastern to the upset in 2015 — Dean Hood — is now outside linebackers coach and special teams coordinator at Kentucky. Since Hood’s departure, the Colonels have won just three games in 12 tries, but Stoops isn’t taking second-year Eastern coach Mark Elder’s team for granted.

“EKU’s going to be very fired up to come in and play and I’m glad Dean’s up there with me this time,” Stoops said. “But they were very impressive, they really were. They’re a well-coached football team and played good in all areas. We’ll have to improve, that’s for sure.”

Kentucky (1-0) opened the season with a 24-17 victory at Southern Mississippi, the team’s eighth victory in the past 11 regular-season games. Although the offense wasn’t on all cylinders, the defense limited the Golden Eagles to just 55 total rushing yards, an average of 1.4 yards per carry.

Stoops, a former defensive coordinator, was satisfied with the defensive performance.

“It takes team defense to stop the run, and it starts up front with being strong and being very sound in our technique,” Stoops said. “I was very pleased with the start of that. I felt like fundamentally that was the best we’ve played in some time.

Kentucky defensive coordinator Matt House said the Wildcats were focused on the task at hand and were focused. House and his unit forced four fumbles and scooped up three of those miscues, including one that was returned for a touchdown.

“(It was) guys doing their job,” House said. “Guys straining. Guys playing with great leverage. You heard it over and over in training camp, and it doesn’t change from week to week: Playing fundamentally sound football and having guys with hats to the ball with great leverage and pad level.”

House expects a tougher challenge from Eastern’s backfield, although quarterback Tim Boyle threw for 320 yards and a pair of touchdowns in the Colonels’ 31-17 loss at rival Western Kentucky in the season opener last week in Bowling Green.

On the flip side, Kentucky offensive coordinator Eddie Gran expects a better performance from his unit this week. Gran was disappointed in the team’s lack of  technique and fundamentals on offense in the opener. Kentucky managed just 254 yards rushiing last week at Southern Miss.

“That will get better,” Gran said. “Usually from game one to game two it gets better. It really came down to fundamentals. We’ve got to get better. That’s what we worked on today, had a really good practice and can’t wait to get back to Saturday, especially in front of our home crowd.”

Like Stoops, Gran is wary of Eastern’s defense, but is more concerned about his own squad.

“I really felt like both Quinton and Josh on the front really played some good football,” Stoops said. “Very encouraging to see. I think Josh is a guy that played a couple of different positions. You could see his versatility for a big guy. He’s very tough to block. When he put his hand in the dirt and rushed from a defensive end position. Some of what we do on third down, he’s a handful.”

Paschal recorded a tackle for a three-yard loss, while Bohanna had two tackles in his college debut.

No issue: Stoops said there are not issues with freshmen Lynn Bowden after the freshman made tweets that were critical of his playing time following the opening win at Southern Mississippi.

“There’s no issue,” Stoops said. “We’ll continue to manage our players. That’s what they pay me to do. We’ll be fine. Lynn’s a good kid, work hard. It’s not uncommon in general. I’ve been a lot of places with some very, very talented young men and the competitive nature comes out in kids sometimes and we’ll be fine. There’s no issue at all. That’s the good thing about our football team now and where we’re at.”

Bowden, listed No. 2 on the depth chart at punt and kickoff return and behind senior Garrett Johnson at “F’ receiver, was held from interviews Tuesday following practice.