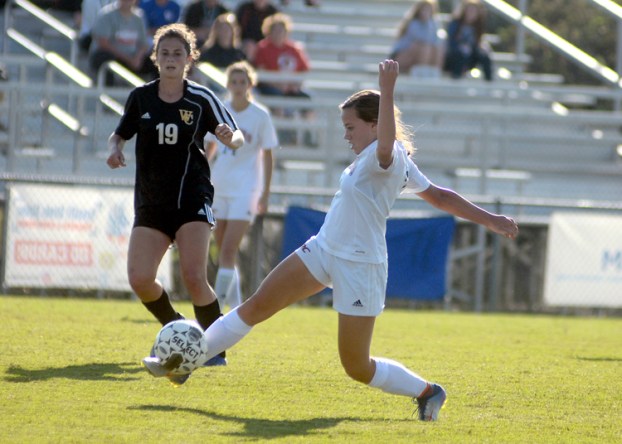 Behind a stout defense and a potent offensive attack, the Cardinals topped Woodford County Saturday, 4-0, in Winchester.

Through the opening minutes, Woodford controlled possession and created some scoring opportunities.

“They threw some things at us we had never seen,” GRC coach Matthew Abner said. “They dropped everyone back almost to the center line and waited until we played the ball, giving us all the space we wanted to use and we just panicked because we had never seen that.”

The Cardinals broke through with a penalty kick by Madeline Mann and a Haley Hannan goal in the first half. Shannon Ramey added two goals in the second half.

Ramey earned the assist on Hannan’s goal, while Allie Bush assisted both of Ramey’s scores.

“Once we adjusted and learned to take what they gave us — they gave us that open pass in the back — just take it and go from there and work the ball up the field, we were able to wear them down and eventually start getting some goals,” Abner said.

The Yellowjackets never found an answer, but they threatened early and found some spots to attack even as they fell behind.

“They had some chances,” Abner said. “They’re a quality team. I think it was good to face them before (No. 1) Henry Clay, because they gave us something we hadn’t seen and good teams rise above.”

Laura Martin had six saves — combining with Brooklyn Johnson on the clean sheet — the fourth straight for GRC in the past four games. One of those six saves was an acrobatic play in the second half, leaping to knock the ball in front of her then diving to cover it.

“She’s athletic,” Abner said. “This is a big shutout for us. The first of the year, we gave up a bunch of goals, but we’ve turned it around. We’ve really focused on our defense the last few weeks.

The Cardinals are now perfect through the first 10 games of the season. Woodford falls to 4-3.

The schedule gets no easier for GRC. The Cardinals welcome the top-ranked Blue Devils tonight at 7:30.

Henry Clay is also undefeated, coming in with an 8-0 mark.

“They’re good,” Abner said. “They’re good defensively. They’ve got a girl up top who is extremely fast. They’ve proven themselves against good teams.”

Something will have to give tonight. The Blue Devils have given up just four goals all season. The Cardinals average more than five goals a game.

“We’ll see what happens,” Abner said. “They’re going to have to score against us. They’ll have to find a way, because we’re going to put goals in the back of the net.”