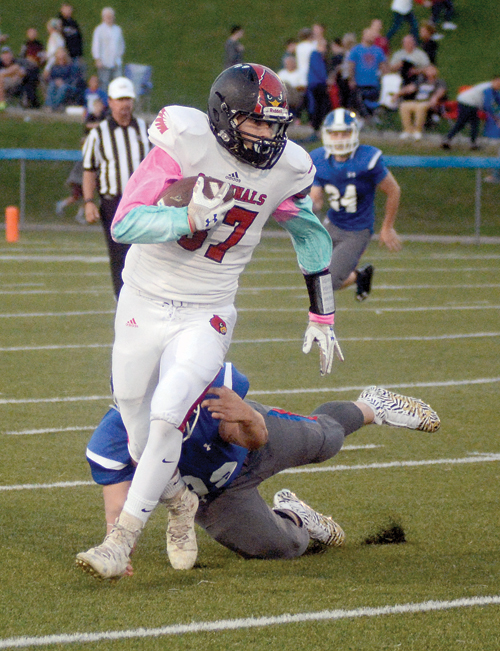 The Cardinals did themselves no favors by turning the ball over three times in a 51-21 loss to the Indians.

“Montgomery came to play and they did a great job,” GRC coach Oliver Lucas said. “I don’t take anything from them. Our defense just didn’t play anywhere near as well as they could tonight.”

Early on, it looked like the Indians were suffering from nerves. The Cardinals went three-and-out on their opening drive but recovered a fumble on the punt return. But GRC turned the ball over on downs without picking up a first down despite starting on the Montgomery 32.

The Indians marched the ball down field and scored to draw first blood at 7-0 with 4:51 to play in the first quarter.

The GRC offense came to live on the following drive, which tied the score after a Nitavius Thomas two-yard rush on the first play of the second quarter.

The Indians scored on their next offensive play and never looked back.

GRC turned the ball over on a fumble, an interception and failing to convert on a fourth-down try on its next three possessions. The Indians turned all those into touchdowns and led 35-7 at the halftime break.

Thomas and Martavious Hooten scored rushing touchdowns in the second half, but the Cardinals never truly recovered.

“They executed and we didn’t,” Lucas said. “We did not play well, but this loss is on me. This goes on my record, not theirs.”

GRC’s three-game road trip comes to an end. The Cardinals finished the trip 2-1, so they will bring home a .500 record to Cardinal Stadium when they host Grant County (0-4).

“We’re going back to the drawing board,” Lucas said. “You can hang your head or you can get right back in the game and try to lick your wounds. We’ll practice hard and make it happen.”

The Indians improve to 3-1 and host Fleming County next week.

When the George Rogers Clark High School football team visits Mount Sterling tonight, the Cardinals will be looking for their... read more