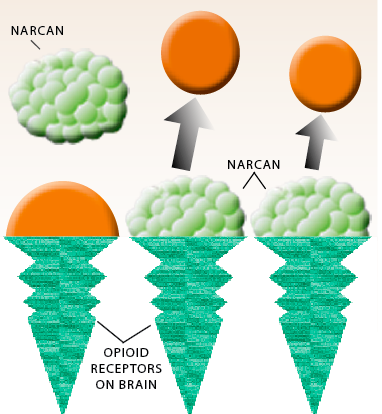 Overdose Antidote: Demand, cost of Narcan on the rise nationwide

In the last decade, heroin and related opiate drugs have become dominant in the illegal drug scene and one of the leading causes of overdose deaths.

As the number of heroin-related overdose deaths has grown, a time-tested medication is helping prevent more deaths from overdoses.

Narcan, the brand name for naloxone, has been in the spotlight for the last couple years as a front-line tool to revive people who have overdosed on opiates.

The recent addition of a nasal injection formula has made the drug even more accessible and usable by lay people.

That access often makes the difference to the person having the overdose.

“Prompt action by a non-professional who observes an individual experiencing early stages of opioid overdose and who administers naloxone before professional first responders are on the scene, greatly increases the probability of survival,” according to a 2016 public policy statement by the American Society of Addiction Medicine.

Naloxone is a long-established treatment to fight the effects of opioid overdoses in the U.S.

According to the American Chemistry Society, naloxone was patented in 1961 to treat constipation in chronic opioid users. Scientists later learned it temporarily blocked the effects of overdoses. In 1971, the Federal Drug Administration approved the use of naloxone by either intravenous or intramuscular injection to treat overdoses by prescription. It was later approved for over-the-counter sales in several states. In 2015, a nasal injection was approved as well.

Opiates work by attaching to and activating opiate receptors in the brain, according to overdose-lifeline.org. Naloxone removes the opiates from the receptors, which allows the person to revive and emerge from the overdose, at least temporarily.

The drug has no addictive or painkilling qualities and almost no side effects. Naloxone takes effect within a couple minutes and will block the effects of the opioids for 30 to 90 minutes.

“It’s easy to administer. It’s safe to administer,” Clark County Public Health Director Scott Lockard said. “It blocks those receptors in the brain to block the overdose. When the Narcan wears off, the person can relapse.”

Though naloxone and Narcan have been around for decades, demand has grown tremendously in recent years as heroin, methadone, morphine, hydrocodone and other opioids have grown more popular with drug users.

“An unintended side effect was heroin came back,” Lockard said. “You can get a hit for $5.”

“We’re averaging at least one to two doses a day, sometimes more,” Winchester Fire-EMS Chief Cathy Rigney said. “It may be more if there’s a new batch (of opiates) around.”

There have been programs to expand public access to naloxone, but demand has already outstripped some of those.

“Sometime last year, the health department and some others were able to get a grant to buy some Narcan kits,” Rigney said. “We hoped it expired before we used 210 doses. That did not come into play.”

So far in 2017, Rigney said the department has responded to 124 overdose-related cases and used 125 doses of Narcan. Most of those calls were related to heroin, she said.

According to the Centers for Disease Control, in 2014 there were nearly 19,000 deaths from prescription opioids, and 10,574 of those were related to heroin.

“A few years ago, very few of us knew what Narcan or naloxone was,” Lockard said. “Now it’s very common in our community.”

Not just for professional use

As the drug problem has grown, most states in the country approved naloxone and Narcan for use by lay people, including law enforcement and relatives.

The American Society of Addiction Medicine reported in 2016 that 14 states approved over-the-counter sales of naloxone “for individuals vulnerable to opioid overdose or members of their families, significant others or companions.”

The Clark County Agency for Substance Abuse Policy regularly schedules Narcan training sessions, including one later this month, for the public. At the conclusion of the training, each class participant receives a pre-packaged dose of Narcan for future use, ASAP board member Melissa Stocker said.

Putting the medication is the hands of those closest to potential overdose situations can be the difference in life and death, she said.

Stocker said ASAP trains people to call 911 after administering the Narcan, as it does wear off. The first dose will buy time until EMS personnel arrive and can give more doses, if needed.

Stocker said she’s heard from trained lay people who were contacted by neighbors in the middle of the night about a loved one having an overdose. The person administered the Narcan, and they resumed breathing.

“When you hear that, you know you’re doing the right thing,” Stocker said.

“A lot of times, we’ll get there before EMS does,” Hall said. “We have had, I think, two or three times we’ve actually used it. It works. Again, it’s a temporary fix. They’ve only got a short window before it wears off.”

Clark County Sheriff Berl Perdue Jr. said his deputies all carry Narcan, but none have had to use it yet.

“We’ve been fortunate,” he said. “EMS is on scene before us or as we arrive. What we carry … is the nasal mist. If it was an IV thing, we’d never carry it. We don’t have that expertise.”

Perdue, who is also president of the Kentucky Fraternal Order of Police, said he’s talked to officers across the state, particularly in northern Kentucky, who have used it, sometimes more than once.

“We have a lot of people who are in and out of the schools for various reasons,” Clark County Director of Pupil Personnel, Student Support Services Greg Hollon said. “The public school system has a vested interest. We feel it’s a responsibility we have to provide as safe an environment for our students and visitors as we possibly can.”

Hollon said none of the school’s Narcan doses have been used since they were approved at the beginning of the 2016-17 school year.

The growing heroin problem and demand for the drug has caused prices to spike.

“It is a hot item right now,” Rigney said. “We went with something that used to be a couple dollars (per dose). The least I’ve seen now is in the $50s.”

This year alone, Winchester Fire-EMS has spent $4,625 for for the 125 Narcan doses its used, which averages to $37 per dose.

A large factor in the rising cost is increased demand, since it is available to lay people with minimal training.

Rigney said it’s the age-old problem of supply and demand.

“We’ll have to continue to buy it,” she said. “We’ll continue to carry it as long as we can. We almost can’t afford not to do it.”

Rigney said the city’s ambulances carry both intravenous and intramuscular forms of naloxone.

Adding to the financial issue is patients often require more than one dose, she said.

“In the past, you could see if you give one dose, the person improved,” she said. “Now with the drugs getting stronger and not knowing what is mixed in, it might take more than one dose. It’s not unusual for us to use two or three doses of Narcan to see the results we’d like to see.”

At this point, there are no other alternatives to naloxone, she said.

“We will continue to carry it as long as we can get it,” she said. “Services are taking a hit on that.”

Still, it is something that can make a difference.

“Seconds count,” Lockard said. “They can save a life. Substance abuse disorder has become so prevalent (and) Narcan is an agent that’s a first line of defense.”

Partners in Education Is looking to expand this school year, and leaders of the organization say they are open to... read more