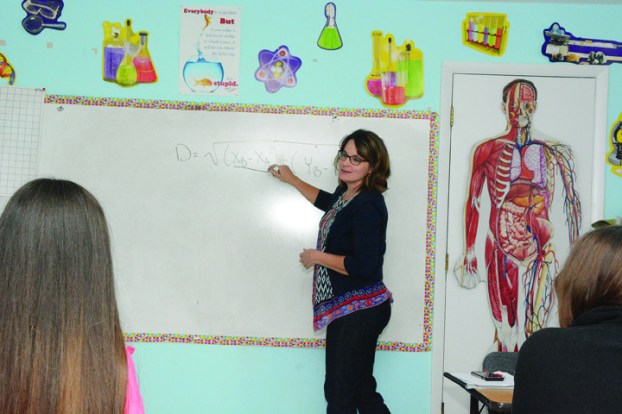 While the majority of students in Clark County attend Clark County Public Schools or private schools, the community also has a healthy population of home schooling families who work together to share resources and educational styles.

According to Amy Scalf, Christ Church of Winchester’s Genesis Academy grew out of one such group.

Scalf, an elementary teacher at the academy, said the school began in 2012 with a total of 12 students as a home school hybrid. Since then, it has grown in popularity with homeschooling families to instruct as many as 70 students a year.

Scalf, who previously taught in public, private and charter school settings, said she was hired as a teacher for the group because of her experience. Later that year, as the number of students began to expand, Scalf hired Sherry Mohr — whom she had worked with at a different school — to instruct middle and high school students.

The academy now has nine teachers.

Genesis Academy is a little different from more mainstream private schools because of several factors. First, the students who attend classes there are not required to take a full-time course load, though Mohr said most do.

In fact, Scalf said the instructors at Genesis don’t like to refer to themselves as “teachers” because the head teacher for each student is considered the student’s parent, whether they are full-time or part-time.

When students are enrolled at Genesis, their families are given a packet that includes a list of the subjects homeschooled students must be taught according to state law. The parents then determine what courses they will teach and what they want taught by the instructors.

Scalf said even parents who enroll their students full-time at the academy are expected to participate heavily in their child’s education.

Another factor that makes Genesis Academy different from other schools in the county is its flexibility in terms of curriculum choices.

Scalf said the school is not bound to any one curriculum like many other educational institutions are. In fact, the resources and styles used may vary widely from one instructor to another.

“We tailor our curriculum and educational practices to the individual student,” Scalf said.

She said some children need help in some academic areas but require more of a challenge in others.

“If you’re in the ninth grade and need to take a junior-level math course you can,” Mohr said. “This is my third year teaching chemistry, and I’m teaching it in a different book and in a different way this time because this group needs it differently.”

Much of the curriculum choice comes from the teachers, who have varying styles.

Scalf said Genesis works with CCPS to offer speech and occupational therapy services to students who require them. However, the school does not accept students who have behavioral issues.

Mohr said the academy’s small size allows instructors to be more accessible to parents and the students themselves for any needed assistance.

Autumn Kincaid didn’t know her artwork would end up on the cover of her great-uncle’s book when she drew the... read more