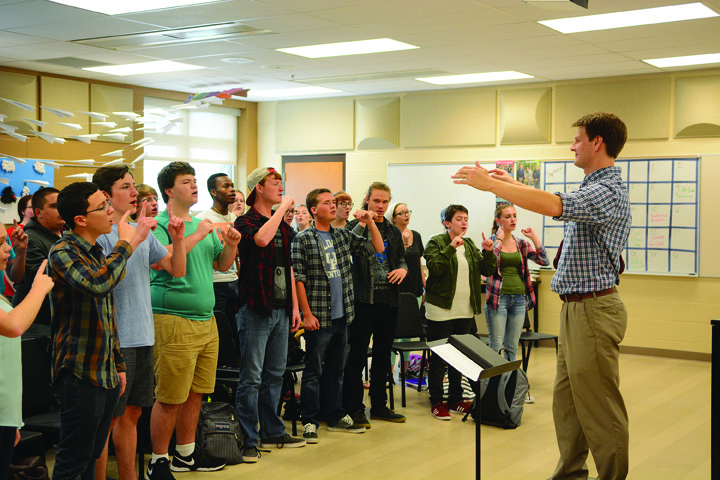 The concert is a collaborative effort including the Cardinal Singers and the Kentuckians Chorus.

GRC Choir Director Kristopher Olson said the show has become a tradition for the students in the program, and it offers a way to start the year strong as members prepare for a show about one month after the school year begins.

“We have a fantastic ensemble this year,” Olson said, “The Cardinal Singers will be doing two or three more songs this year.”

Olson said the show will follow a similar format as the past two shows, with performances by the Kentuckians Chorus, Cardinal Singers and soloists.

The selection of songs to be performed is intentionally varied in style to show off the versatility of the school’s choir, Olson said. The students will open with a children’s song, but audience members can also expect to hear Willie Nelson, Italian opera and classic spirituals.

The Kentuckians Chorus will perform songs based on their theme for the year, which is Las Vegas.

“Expect to hear some from the Rat Pack, as well as songs about casinos and other things related to Vegas,” Olson said.

The concert, as always, will be hosted at Leeds Center for the Arts.

“It’s always wonderful to be in a position offer space and volunteer time for our kids,” Miller said. “This is a team effort, and it’s great to come together for students.”

Tickets for the concert are $12 for adults and $8 for students. All of the money raised through the concert is used to cover expenses in the chorus program, including accompanists, uniforms, workshop and audition fees, clinicians, transportation expenses and sheet music.

The concert will begin at 7:30 p.m. and is expected to last about two hours.

Olson said he has been very impressed by the GRC singers he is working with this year, most of whom are juniors and seniors.

He said their experience has allowed the chorus to try a wider range of songs and take on some challenging projects, but the group is also laid back enough to have a lot of fun with simpler music as well, including the secret children’s song they will open with.