FB: GRC bounces back with win over Grant 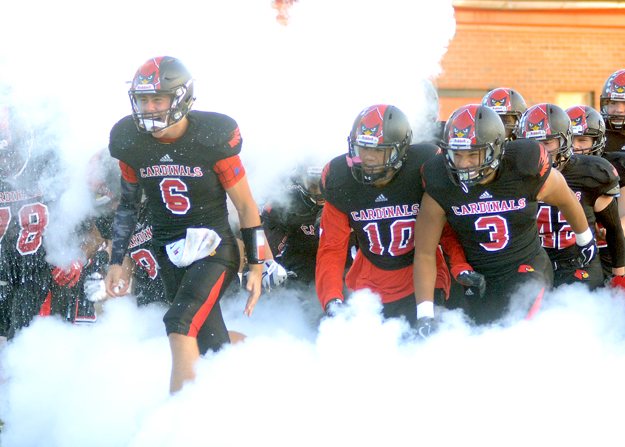 The Cardinals smothered the Braves defensively and ran the ball with ease through the first half on their way to a 47-14 victory, to rebound after last week’s loss.

The running game looked strong for the Cardinals, who had six rushing touchdowns in the first half.

“The offensive line was doing what they should be doing by being aggressive,” Lucas said. “That’s where we’ve improved the most. They’ve been doing a great job of moving people out of there.”

Nitavius Thomas had a big game while only playing in the first half. He finished with four rushing touchdowns on 135 yards. The first offensive play for GRC was a 45-yard run by Thomas.

On the next play, he scored on a nine-yard run. Tye Boyken’s point-after kick was good and the Cardinals were off to a running start at 7-0. They didn’t let up until the half was over.

On the ensuing kick-off, Trevon Jones pulled down the Grant County return man around the 10-yard-line. Two plays later, he picked off a pass to give the offense a short field at the 37-yard-line.

The three-play drive that followed were all run plays calling Thomas’s number until he punched in the score for a 13-0 lead.

The next Grant County possession ended on a punt that Tyre Conner returned 40 yards for a score and a 19-0 advantage.

Grant County’s next punt was blocked by Ethan Thomas and recovered by Brooks Denham. GRC quarterback Jordan Manley found Jadan Farris on a 14-yard pass to set up a 12-yard rushing touchdown by Thomas.

When the smoke cleared, the Cardinals were up 26-0 before the first quarter ended.

Just before the quarter ended though, the GRC defense had some more excitement. Jehdon Jenkins forced a fumble in the Grant backfield and Austin Blair scooped it up. As Blair was wrapped up, he pitched back to Jenkins, who carried the ball to the Grant four-yard-line.

Martavious Hooten finished the short drive with a touchdown run to put GRC up 33-0.

Thomas added another score before the end of the first half. Seth Boyken punched in a second-half touchdown for GRC’s final tally of 47.

Grant scored a pair of touchdowns in the second half, the first coming off the opening drive of the half after recovering an onside kick.

“The defense started off solid and then we got a little sloppy,” Lucas said. “That’s learning how to win. You can not allow people to get up especially when you’ve got them down. That’s part of learning to win.”

The Cardinals improve to 3-2 on the season while the Braves fall to 0-5. GRC will have next week off for a bye week, before returning to action Sept. 29 to face Boone County at home. The Rebels are 1-3 and lost 51-0 at home to South Oldham Friday night.