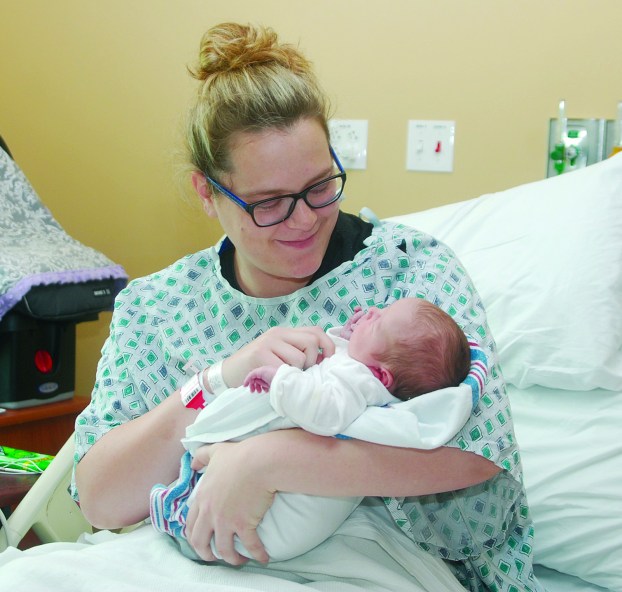 Winchester native Meranda Slone Wells holds her newboprn daughter Mackenzie, who was born Tuesday in Clark Regional Medical Center. Wells and her family evacuated from Savannah, Georgia, a week ago ahead of Hurricane Irma. (Photo by Fred Petke)

Irma evacuee makes it to Winchester for birth

Meranda Wells was supposed to give birth to her third child a week ago in Savannah, Georgia.

Wells, a Winchester native, her husband Tucker and their two children have lived in Georgia for the last four years, where Tucker is stationed with the U.S. Army. When news of Irma started growing, Wells knew it was going to be around the time she was due to deliver her daughter Mackenzie.

Originally, she said her doctor was going to deliver the baby early, but it got pushed back. As warnings grew, Wells said she knew she had to leave and head north.

“They didn’t tell us it was a hurricane until a week before it hit us,” she said. “I left when the Army dismissed us to leave.”

With Tucker due to be deployed, there was the option to stay in Georgia.

“We could chance it and stay there or come up here and he’d have to go back.” she said.

They started making the long, uncomfortable, anxious trip north, along with “all of Florida,” she said. A drive that normally takes eight and a half hours took 18, she said.

“I was so scared I’d have the baby in the car,” she said from her room at Clark Regional Medical Center Thursday.

They finally left Sept. 7 with Wells’ two other children going with her mother while she and Tucker made the drive north. She said they reached Jellico, Tennessee, on the Kentucky border, at 4 a.m. Friday, and started looking for the hospital, in case the baby decided it was time to be born.

While waiting there, Wells said she decided it would be best just to go home to Winchester.

Wells said she called Dr. Mark Pascuzzi in Winchester and explained her situation. With assurances she would be cared for, Wells came back to Winchester and delivered 9-pound Mackenzie Tuesday afternoon.

Mother and daughter are doing fine, though Tucker had to go back to Georgia after the birth, she said.

Once she is discharged, Wells said she expects to go home next week. She said she’s already had better news from her husband than she expected.

“Our house, luckily, did not get damaged,” she said. “I was expecting the worst. It took us a day and a half to get everything off the floor and then you hope no one steals it.”

She said he also warned her to fill her car’s gas tank frequently.

“All the stores are empty,” she said. “Gas is scarce.”

When she does make it home, Mackenzie will be there with her brother, sister and father, having escaped the wrath and destruction of Irma.

American flags lined Chelsea Way off of Paris Road Thursday as members of the community awaited the arrival of the... read more