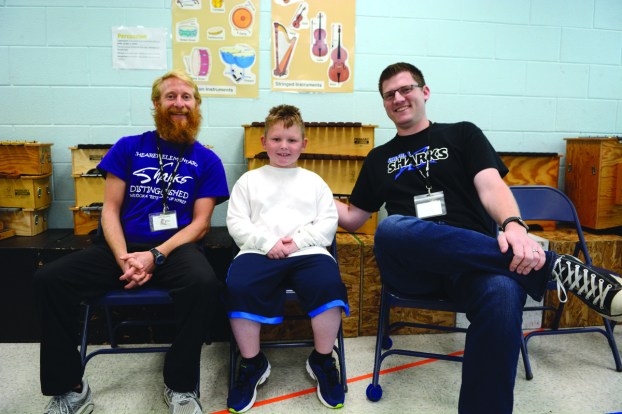 JP Kennedy and Colin Berner pose with Ryan Harding, who they helped Wednesday morning after he got a seat belt wrapped around his neck. (Photo by Seth Littrell)

Sept. 13 began as a normal morning for Mary Esarey and her 8-year-old son, Shearer Elementary student Ryan Hardy. However, it soon turned into what Esarey would describe as the scariest moment of her life.

“We had dropped my oldest off at school and I was taking (Ryan) to Shearer,” she said.

As Esarey pulled into Shearer’s parking lot, Hardy became entangled in the seat belt for the seat he was sitting next to, with it wrapping around his neck. Esarey stopped the car to assist her son, but when she applied her brakes the belt locked up.

“We were doing morning car duty,” Berner said. “We make sure everyone gets into the building safely. That morning, we heard someone screaming and some other parents told us a woman in the lot needs help.”

Kennedy and Berner rushed to Esarey’s vehicle, where she said she was in the back seat trying to hold the locked belt as far away from her son’s neck as she could to keep him breathing. Berner said when he saw Ryan could breathe, he ran into the school to find a pair of scissors to cut the belt.

However, during that time, Kennedy had found a way to release the locked belt and free Hardy.

“There was an emergency release at the bottom of the seat belt where the buckle is,” Kennedy said. “I think it’s there for if you are having trouble with a child’s car seat.”

Friday morning Hardy said he was feeling fine after the incident, though he still had marks on his neck from where the belt wrapped around him.

Esarey said she was grateful that the teachers were able to help her, and said she isn’t sure what would have happened if the incident had happened farther away from the school.

She said the incident has caused her to think more carefully about the dangers seat belts can pose for children.

“That kind of thing is a real fear,” she said. “I started looking and there were so many stories of that happening to children. I feel really blessed that Mr. Kennedy and Mr. Berner were there.”

Esarey said her awareness about the danger has prompted her to better prepare for the unexpected when she’s driving.

“There’s a pair of scissors in our car right now,” she said. “I’ve ordered a seat belt cutter that will replace them when it is delivered.”

She said the emergency release Kennedy had used was helpful, but it was only useable because he had a lanyard with keys small enough to activate it, something she didn’t have with her in the back seat.

As an alternative, seat belt cutters designed to slice through the belt while protecting the wearer from the blade can be purchased for as little as a few dollars online.

According to the National Highway Traffic Safety Administration, children who are not properly restrained by their seat belts are at a higher risk of entanglement.

This can include a child who lies down or sleeps while wearing a seatbelt. Many seat belts will automatically lock if pulled out too far, posing a danger to children who are playing with them.

Sun staff report With the threat of rainy weather over Labor Day weekend, the annual Walk With Friends was postponed.... read more