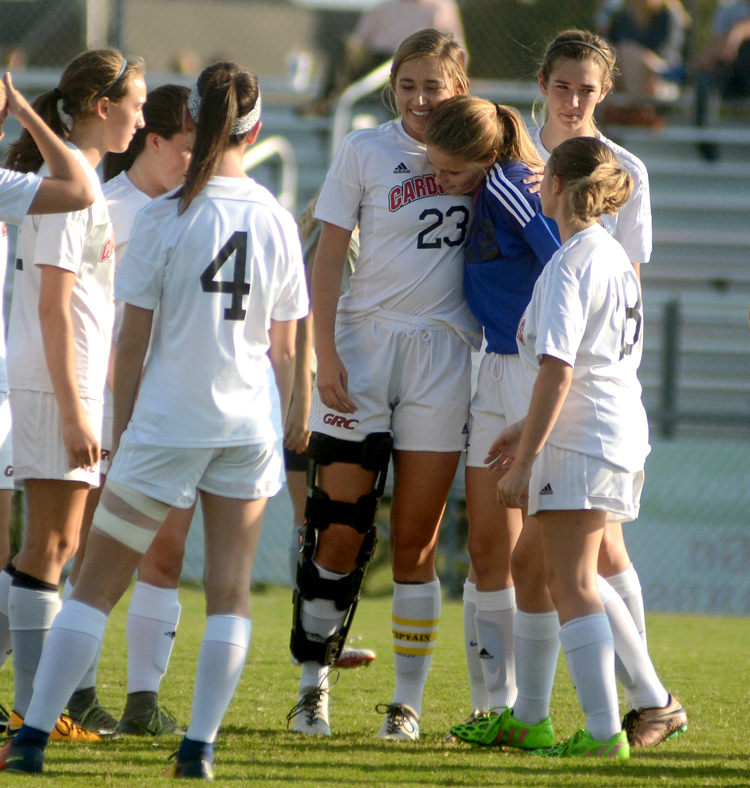 The Cardinals honored the senior class prior to the game and — after a slow start — easily cruised past district opponent Paris, 10-0.

“The hardest thing about senior night is the girls never come in prepared,” GRC coach Matthew Abner said. “They don’t get to warm up like they usually do. Their minds are on a million different things.”

Still, the Cardinals (12-1) jumped out in front in the eighth minute when Julia Pohl scored the game’s first goal.

After a mostly quiet first half, GRC came to life with a flurry at the end of the first half. Delaney Manning scored with 15 minutes left in the period and Madeline Mann scored three minutes later.

Then Haley Hannan scored four goals in five minutes to close the half out with a 7-0 lead.

The second half didn’t last 10 minutes as Leslie Hernandez scored a pair of goals and Shelby Vaughn scored the 10th goal, giving GRC the mercy-rule victory.

The Cardinals honored nine seniors prior to the game.

“This is a strong class from top to bottom,” Abner said. “I start eight out of the nine seniors. I’ve got three girls who are extremely good or else all nine seniors would start.”

“This is a close-knit group,” Abner said. “They’ve really held on to what last year’s team instilled — more of a family-type relationship. It’s good.”

GRC senior Kathryn Gallenstein took the field for the opening kick-off, but the ball was immediately booted out of play and the Cardinals embraced Gallenstein, who left the field for a substitution.

Gallenstein was injured in the loss to Henry Clay earlier this month and won’t return this season. Still, she was able to celebrate senior night and take the field with her teammates one last time.

“She was able to step on the field and end her career as a player on the field,” Abner said. “That’s nice to be able to do that for her. She’s a captain and she’ll help lead from the sidelines as much as she did on the field. She’s that kind of leader.”

The Cardinals are right back in action tonight in a tough matchup. They face defending state champion West Jessamine in Nicholasville at 7:30 p.m.

The Colts are 12-2 and coming off three wins in the Smoky Mountain Cup.

“That’s the hardest thing, not being prepared,” Abner said. “West Jessamine is still one of the top teams in the state. It’s going to be a tough battle. We’ll do our best to play as well as we can.”

The sudden shift in level of play — Paris is winless on the season and West Jessamine hasn’t lost since August — is tough for the Cardinals, but Abner said he hopes the experience helps when the postseason starts.

“District games are always tough because we go from a slow-pace to a higher-paced game,” he said. “Hopefully this gets us ready for district and region play because in those games we’ll see the same thing — a slower-pace game followed by a higher level, quicker-pace game.

“Making the adjustment is tough. We know that. So hopefully, this will get us ready for what we’ll see in the district and region tournaments.”

After battling the Colts tonight, the Cardinals will have a few days off before returning home to take on Montgomery County Wednesday at 7 p.m.

Earlier in the week, the Cardinals started district play with a shutout.

GRC topped Bourbon, 8-0, behind multi-goal games from Allie Bush and Pohl, who each scored twice.

Hernandez and Manning also scored in the win. Taylor Kelly and Shannon Ramey each added a goal apiece.

Bush, Hannan, Hernandez, Ramey and Meaghan Currey each had assists in the win — Hernandez had a pair.

Brooklyn Johnson and Laura Martin combined for the shutout in goal for the Cardinals.

FB: GRC bounces back with win over Grant