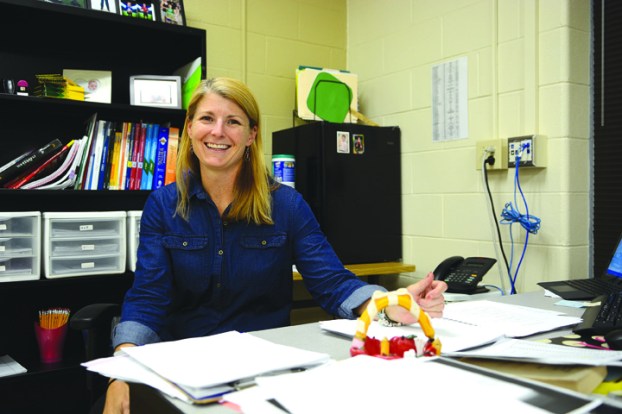 When Clark County Native Jan Horn  was very young, she made up her mind that she was going to be a teacher, with no real compelling reason other than she just wanted to.

“I told my mom when I was five or six that I was going to be a teacher and that’s what I did,” Horn said. “Nobody in my immediate family was a teacher, though I had some distant relatives who were.”

Horn, a nationally-certified teacher, has now taught eighth-grade language arts at Campbell Junior High since the school’s opening four years ago, which is just the latest chapter in her career fulfilling the promise she made to her mom.

“This is my 17th year of teaching in the district,” Horn said. “I did 10 years of teaching elementary at Shearer, and this is my seventh year teaching middle school.”

When she was a child, Horn likely didn’t expect to be teaching language arts. She said it was her least favorite subject as she navigated through school, and she didn’t really learn to enjoy reading until college.

“I went to Transylvania University on a sports scholarship,” she said. “I played basketball the entire way through college.”

But along the way Horn took an interest in literature that stuck with her as she began teaching.

“I was initially hired to teach elementary math,” she said. “Then a reading position came open and I took that.”

Horn eventually switched to teaching fifth-grade language arts through the MAGNET advanced courses program at Conkwright before it became an elementary school. While doing that, she said she began to wonder if she would find more fulfillment working with older students.

When RDC was created after the completion of the new high school, Horn requested to work with eighth graders, a decision she said she has enjoyed.

“I like the content, it’s more challenging,” Horn said. “I also like their personalities. They’re more adult-like, but yet they’re still kid-like. It’s kind of a coming-of-age time.”

Horn said working with older students enables her to have deeper conversations that dive into peer relationships and finding ways to show the real-world applications of the material being discussed.

“We started our unit this year with the movie ‘Freedom Riders’ and our overall topic is what defines success,” Horn said.

Over the course of the unit, students are looking at whether or not environment impacts success and if it can be overcome. The lesson is a part of a push on the part of language arts teachers at RDC to find more engaging topics to discuss with students.

Horn cites her background in sports as playing a part in her teaching style as well. She said she has a drive to treat everyone consistently and fairly as a part of her team, but to also encourage a competitive mindset and put hard work into what a student is passionate about.

Horn said she enjoys building up relationships with her students throughout the course of the school year, starting out as a stranger to them but building up a mutual bond of respect as the year goes by.

She said eventually she would like to make the jump to teaching in high school, but much of that decision will be based on what is happening with her own children, who are attending school at St. Agatha Academy like their mother did.

“I don’t want to become complacent,” Horn said. “I like facing challenges.”

When she isn’t teaching, Horn said she spends a lot of time supporting her children in their extracurricular activities such as sports, dance and band. She and her family live on a small farm in Clark County.

Winchester Police are searching for the man who robbed the BP gas station on Fulton Road late Sunday night. The... read more