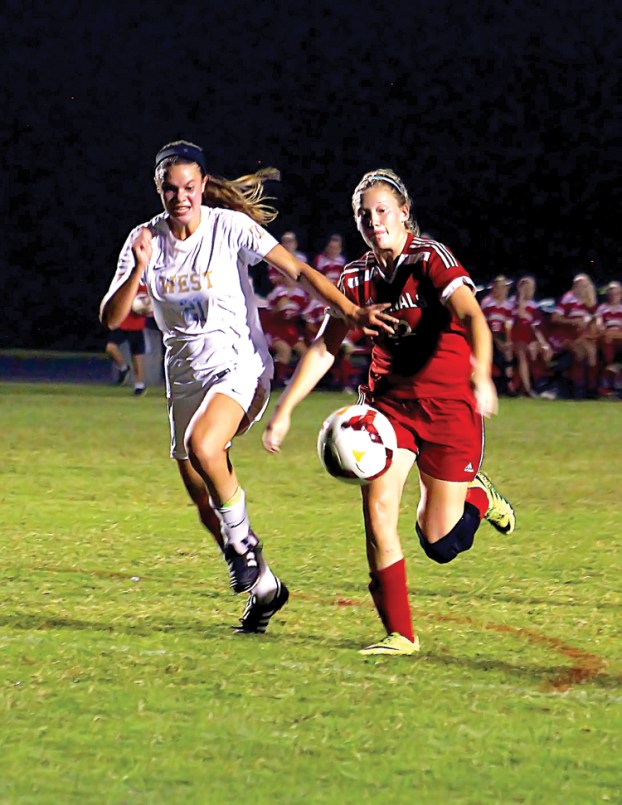 The Cardinals and West Jessamine battled to a 1-1 tie in a physical match featuring strong attacking from both sides, as well as tight defense and excellent goal-tending.

The Cards were evenly matched against West, with a number of shots on goal for both sides but no scoring until 9.7 seconds remained in the first half. Senior Shannon Ramey scored on a short-range shot to put GRC ahead going into the half. Ramey came into Thursday’s game leading the team in goals (18) and tied for first in assists (14) over 13 games.

Senior Morgan Pence returned fire with 33:10 left in the second half, scoring her fifth goal of the season to tie the game. Throughout the game, both teams fought hard on both ends of the ball.

GRCcoach Matthew Abner knew coming in the Colts would be a challenge.

“I figured they would be quick, fast, strong…they gave us what we expected,” Abner said. “I said at one point that it was like watching two heavyweights go at it (in the ring;) it was enjoyable to watch.”

“They play a similar style, a physical game,” he said. “And they don’t give you long with the ball before someone’s on you.”

He took the time to single out goalie Laura Martin for her superb work in the net.

“She probably stopped three balls tonight that could have been goals,” Abner said. “She did a great job.”

West coach Kevin Wright was equally effusive in his praise of GRC’s play.

“Oh, we expected this sort of match from them,” he said. “We knew what we were up against. Their No. 7 (freshman forward Allie Bush) was especially good, tonight. She’s a player.”

The contest was a battle of two Top 15 teams, according to the Maher Rankings.

The Colts were ranked No. 7 coming in and the Cardinals were No. 15.

“They (Cards) were solid,” Wright said. “We’ve seen who they played this year, and they play like an older team. They did a nice job, they were a good test for us. They were composed, well-coached…I was impressed with them.”

The Colts will play Lexington Christian next Thursday in Lexington, while GRC wraps up its slate of 39th district games when Montgomery County (3-4-2) comes to Winchester Wednesday. Kick-off is set for 7 p.m.